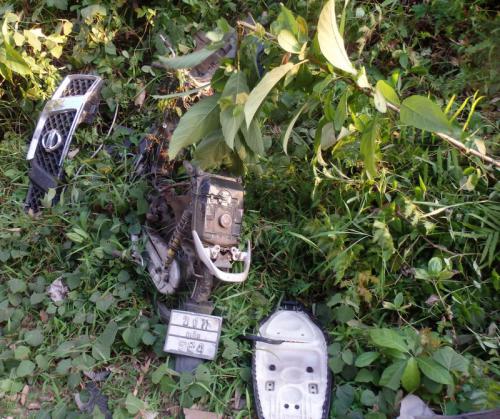 PHUKET: A moonlighting electrician fell asleep at the wheel on his way home from work early this morning, striking and dragging a motorbike taxi driver to his death on Thepkrasattri – Nai Yang Road.

Police called to the scene at 6:30am found a pickup truck with a badly damaged hood in a ditch alongside the road. The taxi driver vest and broken motorbike of Narong Janeprai, 60, were in front of the truck. In the ditch behind the truck was Mr Narong’s body.

“There were signs on the road that he had been dragged for about 100 meters,” said Capt Santi Prakobkarn of the Tah Chat Chai Police.

“We found his helmet – broken – but we don’t know if he was wearing it or not,” he added.

The pickup driver, Nikom Poomchai, 21, told police that his day job was transferring tourist luggage from Phuket International Airport to hotels. At night, he worked as an electrician.

“I was going from Baan Lipon to my house in Nai Yang after my second job,” Mr Nikom told police. “I fell asleep while I was driving and crossed into the other lane and hit the motorbike.”

Mr Nikom, who was not injured in the accident, was charged with reckless driving causing death.