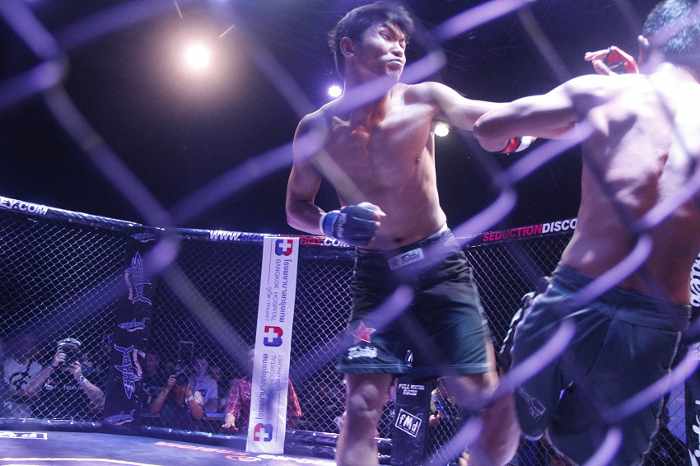 PHUKET: “Full Metal Dojo 2: Protect Your Neck” saw fighters from around the globe (including Thailand, Sweden, France, Canada, Philippines, Cambodia, Afghanistan, Japan and more) enter the cage. History was also made as a professional Thai-against-Thai women’s MMA bout took place inside the kingdom for the first time.

FMD veteran Michael Dubois took care of business in under 30 seconds, pummeling Filipino fighter Trestle Tan with reckless abandon and walking out of the dojo with a victory.

In addition, Dylan “The Muscle” Fussell stepped up in a big way after Glenn Sparv had to pull out of the main event due to an illness. Fussell took on France’s Jason Ponet (10-8), whose fearless striking got the better of the American and the fight was stopped at the end of the first round for medical reasons.

Japanese fighter Takuro Nishimura’s memorable performance rocked the crowd at Seduction night club as he weathered the storm in the first round. Phetsingkorn’s striking softened up Nishimuro, but he made the ground his home and won the bout via reverse triangle.

In line with Full Metal Dojo’s objective of growing the sport of MMA in the region, four amateur bouts also took place before the main card, with fighters from around Southeast Asia battling it out in the cage for experience. Muay Thai fighters dipped their toes into the MMA waters and 16-year-old Singaporean fighter Sim Kai Xiong, came away with a phenomenal victory over an older Thai competitor.

“We couldn’t be happier with how the event went,” said FMD organizer Jon Nutt after the event. “All eight fights were superbly entertaining. Everything about this evening was a success so we will look to do an event again in October. We don’t necessarily plan on keeping it in Phuket. We want to be a touring show. The next show will most likely be in either Bangkok or Pattaya.”