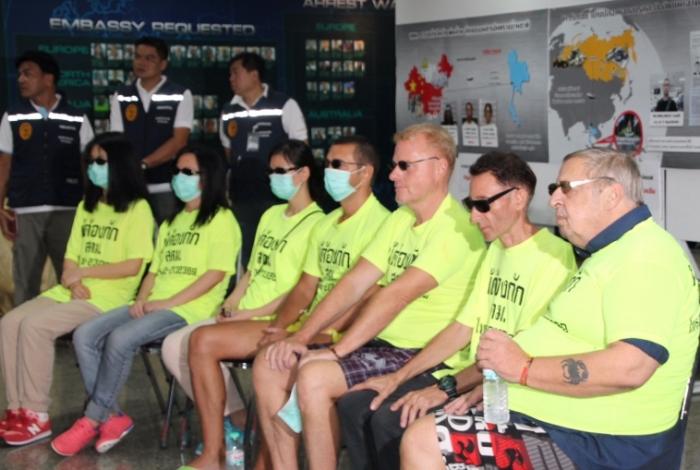 PHUKET: Seven foreign suspects were rounded up on charges of rape, tax fraud, smuggling and defaulting on debts last week in Phuket, Pattaya, Songkhla and Bangkok.

The seven were then celebrated in a parade in front of the media at the Immigration Bureau in Bangkok yesterday.

Three of the suspects were Chinese nationals: Wang Jianlan, 31; Zhang Jingjing, 30; and Jiang Yuemei, 32. They were accused by the Chinese government of committing tax fraud worth 210 million yuan (about 1 billion baht) and smuggling of illicit substances. They had escaped prosecution by entering Thailand on tourist visas and were arrested last Monday at Phuket International Airport and the Centrio condominium in Wichit Sub-district.

Smolnikov Vasillii, 42, the Russian owner of a construction company, was nabbed the same day in Songkhla province’s Sadao District after arriving in Thailand on January 3, 2013.

He was wanted by Interpol for allegedly faking documents concerning a construction project for the Russian government and bribing officials there.

German national Markus Andre, 56, was captured in Pattaya after allegedly fleeing his country and entering Thailand on December 29, 2014. There was an arrest warrant out for him for allegedly defaulting on debts.

Frenchman Patrice Giuliana, 58, was sentenced by a French court to 15 years in jail for raping his daughter, born to his ex-wife, in 2012. He allegedly fled prosecution to Thailand on September 7, 2012 and was detained in the Chana Songkram subdistrict in Bangkok.

Paul Strubin, 67, a Swiss man wanted for fraud and embezzlement, entered Thailand on October 3, 2013. He was arrested in Pattaya after overstaying his visa by 960 days.