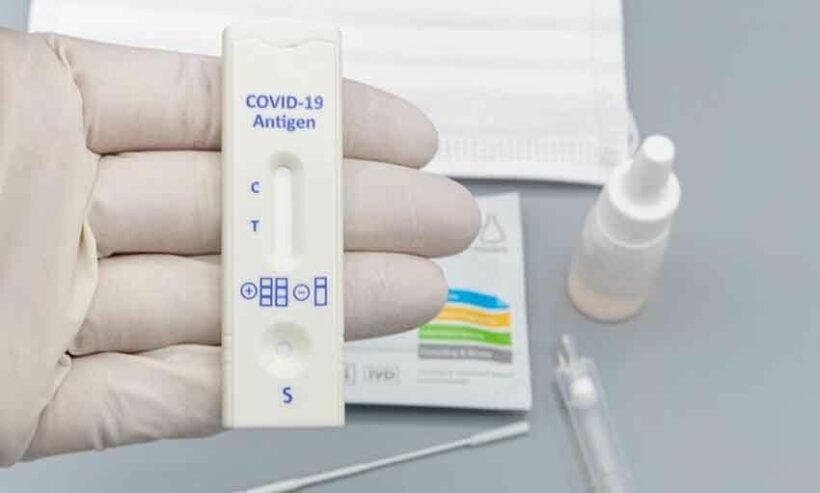 Expats living in Thailand are up in arms after Phuket officials confirmed that foreigners arriving on the island would have to pay for a rapid Covid-19 test that is free for Thais. The testing requirement is part of new restrictions now in force to combat the spread of the virus. However, it is not the cost of the test – 500 baht – that has angered so many expats, but the fact that officials see nothing wrong with charging people based on their nationality.

On Monday it was announced that EVERYONE arriving in Phuket would have to pay 300 baht if they needed the ‘rapid covid test’. But that was amended the next day. Now we have the latest example of 2-tier pricing in Thailand (below).

The news was shared by Samut Prakan school staff and part-time blogger Richard Barrow on his Facebook page and has so far generated over 430 comments (and still growing), most of them furious…

“Unbelievable. I know Thailand is xenophobic, but for the authorities to do that is an absolute disgrace. They can piss off. I’ll take my business elsewhere in future.”

“I pay Thai taxes, I have for 16 years! am happy to bring my money elsewhere then!”

It was not just foreigners commenting however, with at least one Thai person condemning the policy…

“I feel so so ashamed of how my country (or its government) so desperately wants more money to continue their corruption. Any possible ways they can rip you off – they will do shamelessly.”

Effective yesterday, anyone flying in to Phuket from elsewhere in the country must take a rapid Covid-19 test, unless they have taken a negative PCR test within the last 72 hours or can prove they’ve received both doses of a Covid-19 vaccine. With less than 1% of the country vaccinated – almost none of them foreigners – the second requirement is unlikely to be met by many.

Foreigners who have to take the rapid test, regardless of whether they are tax-paying work permit holders or retirees contributing to the economy, long-term residents or married to a Thai, will have to pay 500 baht. For Thais, it is free. The focus of expat anger is not the cost, but the principle, which is being roundly condemned as xenophobic.

Foreigners employed in the Kingdom in particular, are angered, given that they have been paying tax for years and have social security coverage. In response, Phuket health officials have issued an “explanation” – that manages to explain very little. 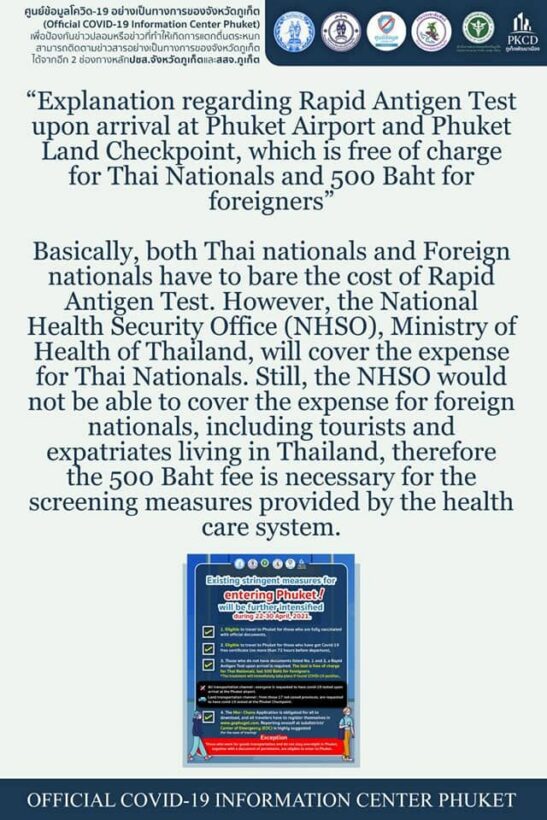 Meanwhile, while the new restrictions apply to everyone arriving by air, for those arriving by road, only people coming from the high-risk “red” provinces need to meet the entry requirements.

And, just as a footnote, if your rapid covid test conducted by airport officials happens to come back positive you will be whisked away to a Phuket field hospital for a 14 day stay.