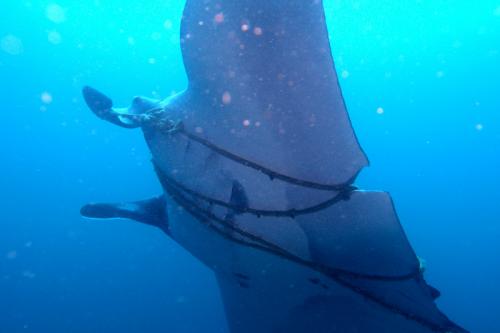 PHUKET: The sighting of a 5-meter manta ray entangled in heavy ropes off Koh Racha Noi has galvanized marine experts from as far away as Bangkok and Singapore to come to its rescue.

Nantarika Chansue, the director of the Veterinary Medical Aquatic Animal Research Center and faculty of Veterinarian Sciences at Chulalongkorn University in Bangkok, has called on the entire Phuket community for help, suggesting that community members post comments on “Save the Manta” Facebook event (here) if the pelagic animal is spotted again.

Once Dr Nantarika is notified of another sighting, she can coordinate her team, staff from the Marine Life Park in Singapore and relevant Thai government bodies to launch an emergency rescue mission.

Photos taken by Zylane Lee of the manta ray on February 12 started to circulate on Facebook within the Phuket dive community this week.

“It was swimming alright to our untrained eyes,” Ms Zylane’s mother, May Yuen Wu, who took video footage (view here) of the manta ray during the dive, told the Phuket Gazette.

“This was our first time to see a manta and we were very happy to see it as that’s our purpose for returning to Phuket for diving every year,” she said.

“It only dawned on us that the manta was having problems at the very end [of the dive] when it swam closer to me. We wished we could do something, but we couldn’t. We were sad and heartbroken to see such a beautiful creature in such a state,” she said.

Dr Nantarika told the Gazette that she hoped it wasn’t too late to save the manta ray.

“I’m not sure if the animal is still alive, because the rope went across his mouth. So it depends on whether he can eat or not… If he can eat we have more time to get the rope out,” Dr Nantarika told the Gazette yesterday.

“The first thing to do is find the animal,” she said.

Staff at the Marine Life Park on Sentosa Island in Singapore are reportedly ready to come to Phuket to help in the rescue mission as soon as the animal is spotted.

“Members of the Marine Police and Department of Marine and Coastal Resources (DMCR) from Bangkok as well as Phuket are also ready to take action,” Dr Nantarika said. “Everybody is ready, we just need to know the current location [of the manta ray].”

Even Phuket fishing boats have been put on alert and are ready to respond if necessary according to Dr Pinsak Suraswadi, Acting Director of Marine Resource Conservation and Restoration Division, Department of Marine and Coastal Resources.

Dr Nantarika explained that she has also been in touch with international animal handler, Fred Fan.

“Mr Fan is one of the best animal handlers in the world. I contacted him because has a great deal of experience with manta rays… he is willing to help us as much as he can,” she said.

Dr Nantarika explained to the Gazette that Mr Fan suggested the possible need of an enormous net 300 to 400 meters across for the rescue mission.

“I would prefer not to give it [the manta ray] a tranquilizer, but if it looks like it will be dangerous for the people working with it we might consider the option,” Dr Nantarika said.

“This is a huge animal, it’s not like a dolphin where you can go in and cut the rope, a manta can actually flip you over,” she added.

Dr Nantarika thanked the Phuket diving community, especially Darren Gaspari from Aussie Divers Phuket, who has been a driving force behind the movement to save the entangled manta ray.

With heads of relevant departments in Bangkok for the 16th Convention on International Trade in Endangered Species of Wild Fauna and Flora to handle a variety of wildlife issues including the protection of sharks and manta rays (story here), Dr Nantarika took the opportunity to bring the top brass together to discuss the establishment of a Marine Endangered Animal Stranded Network, which would be a contact point for sightings of stranded and distressed animals like the recently sighted manta ray.

“We need this network because at present there is no coherent way to deal with the many distressed dolphins, whale sharks and manta rays that we find. We can just appeal to locals and divers for help,” Dr Nantarika said.

“The reason I want to do this is because so many of the animals we’ve attempted to save have died because we don’t have enough resources,” she added.

The center would help provide necessary training for locals in Phuket and other areas where distressed marine animals are often found.

Phuket Sports: England in for hard time with Italian visit

Dokset murder trial postponed for want of a translator