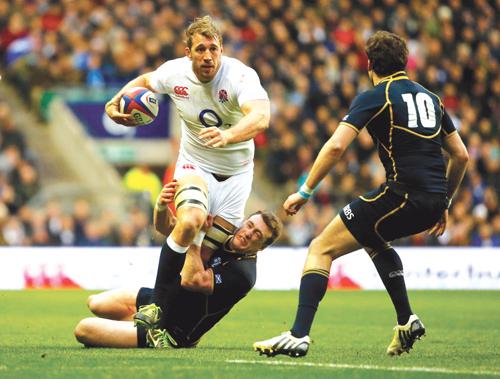 PHUKET: Glasgoq Warriors flyhalf Duncan Weir will make his first start for Scotland in Saturdays’s Six Nations championship match against Wales at Murrayfield after replacing Ruaridh Jackson in the squad announced on Tuesday,

Weir, 21, who has won his three previous caps from the bench, is one of two changes to the starting lineup who defeated Ireland in the last round.

British and Irish Lions tighthead prop Euan Murray, who missed the Ireland match because he does not play on Sundays for religious reasons, replaces Geoff Cross who returns to the bench.

“It’s a moment I’ll cherish and hopefully I can do the coaches justice for giving me the start,” Weir told the Scottish Rugby Union website.

Scotland interim head coach Scott Johnson said Weir had played well after coming on as a replacement in the 12-8 win over Ireland on February 24.

“He’s a talent with a really good work ethic and a thirst to improve, which I like a lot,” Johnson said.

“Geoff was a standout against Ireland and it’s up to Euan, who fronted up big time against Italy, to raise the bar again.”

Scotland, who have beaten Italy and Ireland after losing to England in the first round, share second place in the standings with Wales on four points. England, the only unbeaten team with two rounds remaining, head the table with six points.

Ireland flyhalf Jonathan Sexton has been ruled out of his side’s Six Nations championship match against France on Saturday through injury, leaving a place open for either Paddy Jackson or Ian Madigan.

Coach Declan Kidney, who named the remainder of his team on Tuesday, will decide whether to give Leinster’s Madigan his debut or retain Ulster’s Jackson who struggled with place kicking in his debut against Scotland last time out.

Elsewhere, Fergus McFadden comes in on the wing for the injured Craig Gilroy, Mike McCarthy returns after injury to the second row and Cian Healy is back at loosehead prop after serving a one-match suspension.

“Just before I walked in the decision was taken to withdraw Johnny Sexton but that Paddy will be good to go at training on Thursday,” Kidney told a news conference, referring to a tight hamstring that kept Jackson from training.

“Paddy trained in the position yesterday, Ian trained there this morning and I’m sure they’ll both be available on Thursday and we’ll then make the call.”

The defeat to Scotland, Ireland’s second loss in three matches in this season’s campaign, has piled the pressure on Kidney who oversaw a disappointing Six Nations last year and is out of contract this year.

Sexton, bound for French side Racing Metro next season, should be fit for Ireland’s final outing against Italy along with Ulster wing Gilroy who will train again later this week after suffering a groin injury, Kidney added.

McFadden, who has not been part of the match day squad this year but who has place kicked for Leinster, leapfrogged club mate Luke Fitzgerald to start in place of Gilroy.

England’s back row options for the Six Nations clash at home to Italy this weekend have increased after Leicester’s Tom Croft joined the squad on Monday after his recent return from a serious neck injury.

The Six Nations had looked an unlikely aim for Croft, who suffered a triple fracture to his neck a year ago but his return to first-team action with Leicester means he could play some role in England’s push for a grand slam.

“The indications last week were that it might be a bit early for Tom to get involved in this Six Nations,” England head coach Stuart Lancaster said in an RFU statement.

“But having played back to back games he has now had the all clear from the specialist and Leicester’s and our medics.

“I also had a good chat with (Leicester coach) Richard Cockerill. He is happy with his form and we can clearly see he is playing well, but most importantly Tom feels he is ready – it is great to have him back in.”

Croft made his fifth start for Leicester since returning in January last weekend, impressing in the thrashing of Sale, and while England do have plenty of options in the back row, the experienced Croft’s return is a boost.

“We have competition in all places but the back row is very competitive and to have Tom available just adds to that so we are looking forward to seeing how he does this week,” Lancaster said.

England are on course for a clean sweep in the Six Nations after wins against Scotland, Ireland and France. They face Italy on Sunday and conclude against Wales in Cardiff on March 16.

Warburton, who started on the bench in the 26-9 win over Italy on February 23 after missing the previous round victory over France with a shoulder injury, replaces Justin Tipuric at openside flanker to join Jones and number eight Toby Faletau in the backrow.

British and Irish Lions lock Alun Wyn Jones returns to the starting XV after injury to partner Ian Evans in place of Andrew Coombs while Paul James takes over at loosehead prop from Gethin Jenkins, who has failed to recover from a calf injury sustained in the Italy match.

Interim head coach Rob Howley has named an unchanged backline for a match in which his team will attempt to become the first Wales side to win five successive away victories in the tournament.

“We have had two good, hard-fought away victories but we know we will have to be at our best again to come away from Murrayfield with the result,” Howley told the Welsh Rugby Union website.

“It’s disappointing for Gethin to miss out but Paul has impressed and made an impact in each game he has played.

“We are bringing in a wealth of experience with Alun Wyn and Sam and they both performed well off the bench in Rome. Ryan has led the team to two wins and deserves to captain the side against Scotland.”