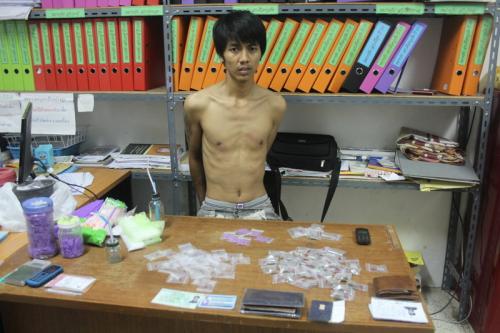 PHUKET: Police busted a Burmese drug dealer suspected of operating out of a house across the street from a Phuket school yesterday evening.

Staking out a house across from Baan Kata School, Phuket Provincial Police officer Wanchai Palawan and his team waited for Anan Kanyarat, 36, to leave the residence before stopping and searching him.

Police found 4.5 grams of marijuana on him and charged him with the possession of a Category 5 drug.

Mr Anan’s confession to having bought the drugs inside the house provided enough evidence for police to go in and arrest the alleged drug dealer Zaw Ko Ko Aung Khor Maung, 25.

Another suspect, Tin Naing Oo Rat, was able to escape the house and flee the police on foot.

Mr Zaw was charged with the illegal possession and intent to sell a Category 1 drug and a Category 5 drug, said Col Wanchai.

The same charges are set to be pressed against Mr Tin.

Mr Zaw has denied the charges, saying that the drugs belong to Mr Tin.

Rohingya trafficking suspect to be charged for abduction, rape