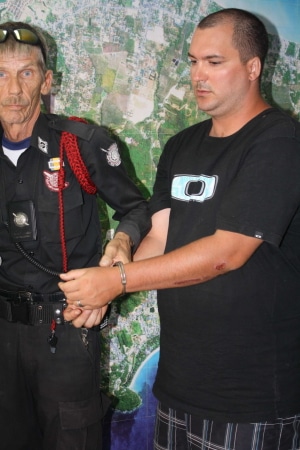 CHALONG, PHUKET: An Australian tourist was one of five drug suspects paraded by Chalong Police at a press conference in Phuket yesterday afternoon.

Richard Beaver, 28, was allegedly caught with 0.9 grams of dry marijuana by police on Tuesday night.

Mr Beaver was stopped on Soi Samakee 2 off Saiyuan Road at around 11:30pm.

The tourist allegedly told police he bought the drugs for 500 baht from a Patong Beach dealer.

Mr Beaver arrived in Phuket on March 10 for a holiday and planned to stay on the island for one month.

Whether he makes it home within the planned time will now depend on how quickly a court hearing can be held.

Four Thais caught with small quantities of ya bah (crystal methamphetamine) were also paraded at the conference, which took place at Chalong Police Station.

“Those involved with drugs should turn over a new leaf right away, before they get arrested and punished,” he said.

Col Wichit warned that the punishment for serious drug crimes was execution.

Doctor gunned down in Phuket Town