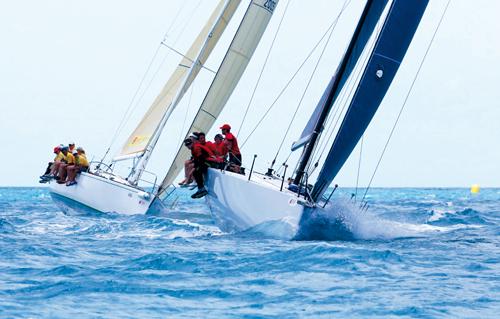 PHUKET: The line-up of boats for the 2013 Samui Regatta, set to take place from today to June 1 off Chaweng Beach, features a strong mix of top international racers and regional regatta veterans.

Familiar faces on the Asian regatta scene, Frank Pong and Geoff Hill, will be leading the charge with the two largest boats in the fleet – Jelik (75ft) and Antipodes (72ft), respectively. Battling it out with them in IRC Zero will be Sam Chan’s TP52 Freefire, a team from the Royal Malaysian Navy sailing their DK47 Uranus and the Aquila Reichel Pugh 45 Katsu, skippered by owner Ben Copley.

In the ever-growing 40-foot fleet, the top contenders are converging on Samui Regatta to battle it out, in this, the final event of the prestigious 2012/13 Asian Yachting Grand Prix Championship.

Competing in IRC One, EFG Bank Mandrake, skippered by Nick Burns is back to defend their title on the well campaigned Mills 40. After losing the title on the final day of last year’s regatta, Bill Bremner and crew on Foxy Lady VI are back to make amends, and will be up against Walawala 2, WindSikher, Rikki Tikki Tavi, Elektra, Siren, El Coyote and Dynamite.

“It’s great to see such a competitive fleet of boats lining up for the Samui Regatta. Indeed, across all the classes there are some very evenly matched boats and crews and I’m sure all will enjoy the five days of racing we have planned for them,” said Simon James, race director.

Having lost out on the IRC Two title by a single point last year, Lennart Fahlgren is back with Amanda and will be racing against Souay 1, Moon Shadow, Phuket favorite Royal Thai Navy 1, and Rolex Sydney Hobart veteran Matt Allen on his Adams 10 Ichiban. With victories at the Phuket King’s Cup and Top of the Gulf regattas in the the last 12 months, Ichiban looks the one to beat.

With last year’s winner of the Multihull class Fantasia unable to defend their title this year, a new winner is set to be crowned from a line-up of some of the region’s best multihull sailors. Largest in the class is the Crowther 42 Sonic, skippered by Kirati Assakul who will be up against the well-traveled Corsair 38 Miss Saigon, skippered by David Liddell, Radab Kanjanavanit and his all-Thai crew on Cedar Swan, and locally-built Crazy Horse, skippered by Kunta.

If the winds are blowing, one to watch out for in the Multihulls is Henry Kaye’s Seacart 26 Sweet Chariot, which favors the strong winds Samui Regatta is famous for.

The regatta is equally well known for its onshore social scene, and the beachfront Regatta Tavern, which becomes the focal point in the early evening as the sailors come ashore.

The five days of racing is combined with six nights of parties, including the off-site Beach Republic Party – a mid-week highlight – and the closing Gala Dinner and presentations under the stars hosted by Centara Grand Beach Resort Samui – a fitting finale to the ‘Tropical Island Regatta’.