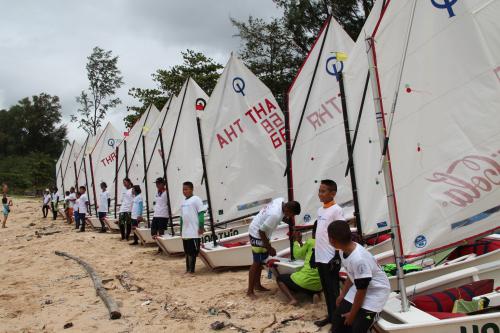 PHUKET: With day one of the final of the Phuket Dinghy series being canceled due to the freak storm that hit Cape Panwa last Saturday, the race resumed on Sunday morning in light wind conditions. A fleet of 17 Optimists and three Lasers did the windward – leeward course in anticipation of wind shift, which is not uncommon after the storm. Three races were completed just before the wind died down in early afternoon.

In Optimist Boys, Sumate was challenged by the neighboring club’s sailor Juladej and Nattapong who just joined race 11 and 12 and trailed closely behind. Sumet who finished 1st in Race 10 was left behind by Juladej , Saravut and Nattapong in race 11 but managed to climb back to his position in the final race by extending the lead distance in the run leg, finishing 1st, 4th and 1st with 6 points.

It was 13 year old Sumate from Phuket who secured top position with 23 points on the score sheet of the overall results, securing the prestigious Phuket King’s Cup for this year. He is followed by Charef from Songkhla (36 points) and his fellow Phuket’s sailor Tritub (52 points) ranked 2nd and 3rd respectively.

Optimist Girls saw Keeratica lead the fleet, followed by Nalinmas and Silawan, who kept up with the pace but were unable to beat the former. However, in the overall results of all three Series Nalinmas came first with 36 points followed by Silawan (42 points) and Keeratika (48 points).

In Laser Standard, Surassawadee retained her position well throughout the three races, while Kittitach and Vinai lined up in the distance and finished 2nd and 3rd respectively. The leader of the fleet, Chat Dawruang held on to his 1st position overall, despite the fact that he missed the last three races of the final series. He came in 1st place in six races and 2nd in three races, with an overall net score of 19. Surassawadee, who also missed the first three races in the first Series, did well in the absence of Chat in the final three races, scoring 27 and ranking 2nd on overall results. Coming third on overall result was Winai (32 points).

Sumate, Nalinmas and Chat are all excited to dress up for the Royal Award Ceremony on December 6 at Kata Beach Resort and Spa. The rest of place winners, including the three winners, will also receive PTT Global Chemical Trophy at the opening party of Phuket King’s Cup at Kata Beach Resort & Spa on December 1, 2013. Top Optimist and Laser sailors from Phuket will enter the International Dinghy Class at Phuket King’s Cup Regatta week during December 1-6 at Kata Bay. There will be top sailors from Sattahip, Songkhla, Royal Varuna Yacht Club in Pattaya and China to make the four days series race in Kata Bay a real challenge for all.