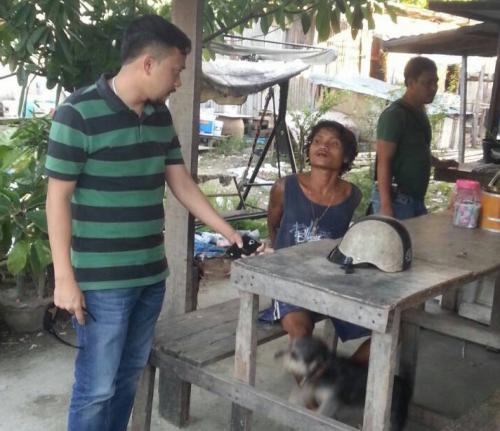 PHUKET: Police have arrested one man for the murder of Phuket construction worker Than Zaw, 24, a Myanmar national whose body was found dumped in a pond near the Patong Municipality offices on Sunday.

Mr Than’s throat had been slashed and his torso had been stabbed at least 17 times (story here).

The arrest followed Mr Than’s employer contacting police on Monday after he was told by one of Mr Than’s friends that there were blood stains in Mr Than’s room.

“It was the same morning the body was found,” Lt Col Somsak Tongkliang of the Patong Police told the Phuket Gazette.

Officers called in the friend, Mr Nai, for questioning.

Mr Nai gave a statement testifying that Mr Than had an argument with two other Myanmar nationals in the construction camp, Col Somsak said.

“On Saturday night, Than was drunk. He went to Aung’s hut to borrow 200 baht. When he arrived, Aung was in front of his room chatting with his friend Ji Meng,” Mr Nai told police.

“Aung refused to give him the money. That made Than very angry and they argued over it. I saw the fight brewing and I tried to stop them by taking Than back to his hut,” he explained.

“After Than was home, I went back to Aung’s, where he was stilling hanging out with his friends. I told them than Than was very angry and he said that he wanted to cut their throats,” Mr Nai recalled.

“After that, I went to my hut and went to sleep,” he added.

“I went to check on Than in the morning. I didn’t see him and there were blood stains in his room and things knocked over like there had been a fight,” Mr Nai said. “So I told my employer what had happened.”

After hearing Mr Nai’s story, Col Somsak called in Aung’s wife, Than Than, who told police that her husband had confessed to killing Mr Than.

“At about 11pm on Saturday, my husband left the house with two friends. They came back in about an hour to get a bucket and left,” she said.

Plainclothes police reported seeing Mr Aung in a convenience store on Phisit Goranee Road near the worker’s camp at about 11am on Tuesday. Officers moved in and quickly placed Mr Aung under arrest.

“Mr Aung confessed that he was involved in the murder of Mr Than, but he claimed that Mr Than had threatened to kill him,” Col Somsak said.

“We are now seeking two other men, who we know only as ‘Ji Meng’ and ‘Sia’,” Col Somsak said.

Both fugitives also lived at the same worker’s camp, where Mr Aung and Mr Than lived, he added.