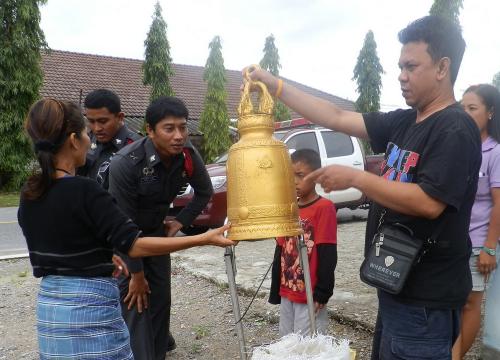 PHUKET: Police are on the lookout for a man who reportedly tried to sell a temple bell to a secondhand store in Thalang while drunk.

Natthakarn Rattanaphan, 33, called the Thalang Police yesterday afternoon after a man arrived at her secondhand store in front of the well-known Term Fun housing estate in Baan Manik (map here).

“The man, aged about 50 years old and pushing a cart, appeared to be drunk and tried to sell the bell for 1,200 baht,” said Adul Boonrat of the Thalang Police.

“He said that he made the bell to order, but his customer did not have the money to pay for it, so he wanted to sell it anyway,” Lt Adul explained.

Still suspicious the bell might have been stolen from a temple, Ms Natthakarn called the police.

“Apparently the man heard her talking on the phone with us. He ran off and left his cart and bell behind,” Lt Adul said.

“We are checking whether any bells have been stolen from local temples and we’re still looking for the man so we can question him,” he added.