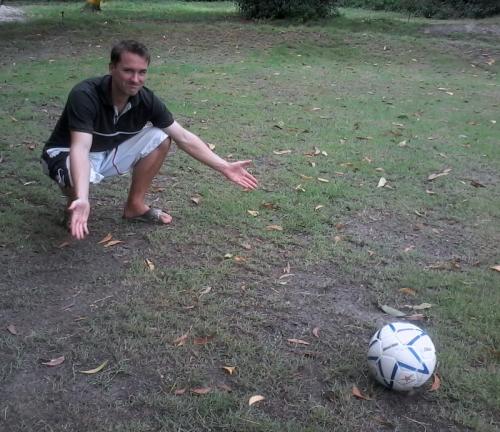 PHUKET: A sounder of wild boar has settled on an 18-hole “Football Golf Course” in Chalong as their preferred dining area, but in the pigs’ quest for cuisine, they’ve left damaging divots on the greens.

“Our course is currently under attack by wild boars, which are rampaging through it at night and ripping up our greens,” said Neil Simmons of Phuket Games Zone, located in Soi Palai (map here).

“You hardly ever see them. They come and go, and the attacks always happen at night,” he said.

The sounder was first spotted about six months ago, and has since ripped large gashes in the greens at holes 7, 8 and 10.

Attempts to snare the big brown boars have been fruitless.

“We borrowed a wooden-cage trap from a neighboring pig farmer, but the squealers just didn’t take the bait. I also set down some rope snares, but they avoided those too,” he explained.

Last week, the pig farmer’s dogs bailed up a baby pig, but some of the larger specimens seen roaming around the course have been estimated to weigh 60 to 70kg.

Players are asked to notify course management if they spot any of the porkers.

In the meantime, play on the course continues.

“The damage in the rough areas hasn’t been that bad, but we have had to work hard to smooth out the damage to the greens,” Mr Simmons said.

The greens have been sufficiently smoothed over and no mulligans will be offered for shots that players claim were affected by an uneven surface, he added.