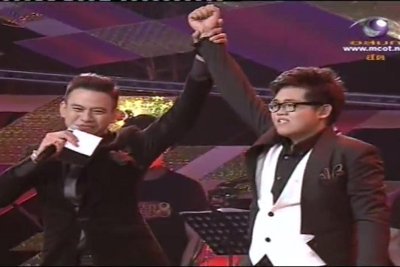 The 21-year-old law student at Thammasat University, Thailand’s premier law school, was a surprise win in the show’s season finale held at the Impact Muang Thong Thani stadium, better known simply as the “Impact Arena”, on the outskirts of Bangkok last night.

Dome’s win flies in the face of many people posting comments on The Star 8 Facebook fan page saying that Thanathat “Kangsom” Chai-ut would win because of his additional good looks.

Dome tearfully accepted his award with his mother and father, wheelchair bound since suffering a stroke, joining him on stage.

“Many people teased me that I would never make it, but I never gave up. Actually, it inspired me to try even harder. And my family always supported me,” he said.

“All my life I have been dreaming of this, but I have been insulted [because of his looks]. I never gave up. I would like to thank everyone who helped me – my family, my vocal trainer and the producer of the show for giving me the opportunity to join the contest,” Dome added.

Dome’s mother thanked Phuket Governor Tri Augkaradacha as her words were broadcast across the country.

“I would like to thank the Governor of Phuket, Tri Augkaradacha, for the support he has shown for our family,” she said. (Click here to see a video of the acceptance and thanks speech.)

Foreigners not familiar with the sheer scale of the popularity show enjoys across Thailand are probably more familiar with Dome’s face gracing a billboard opposite Central Festival Phuket with a message of support from the province.

He is also a former student of Phuket Wittayalai School in Phuket Town.

Silvy, 15 years old at the time, was still studying at Kajonkietsuksa School while competing in the contest.