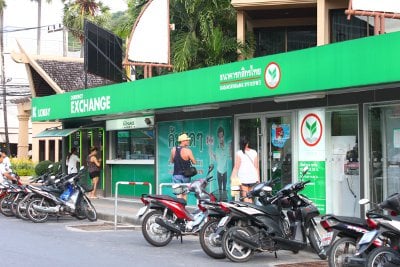 PHUKET: A key witness in the investigation into the 48,000-baht robbery of a Phuket currency exchange kiosk on Saturday night today told police that their prime suspect was not the man who committed the robbery.

Mr Nathee was named in a complaint filed by a woman with the Patong Police, claiming that Mr Nathee had absconded with her daughter.

Police have yet to locate Mr Nathee or the daughter.

However, 29-year-old Chanya Sriwasuthom, who was the Kasikornbank Customer Service officer in the booth when the robbery occurred just before 10pm on Saturday, said that the robber was similar in looks, but she was sure it was not Mr Nathee.

Ms Chanya described the robber as a Thai man, over 160cm tall, with dark skin. He was wearing a black jacket at the time of the robbery, she said.

“He parked his motorbike right in front of the booth and he was still wearing the motorbike helmet with the clear plastic visor down when he approached the window,” Ms Chanya said.

“The streets were very quiet, and at that time of night we usually see Thai people approaching us to use the ATMs right beside our window,” she added.

The currency exchange kiosk is attached to the Kasikornbank branch directly in front of the Kata-Karon Municipality offices on Kata Road.

“Since it was quiet, and there was only one hour left until we closed, I thought I might as well tally up our stock in hand for the night early,” Ms Chanya said.

“I had just finished checking the banknotes in stock when the man handed me a paper bag through the security box, but when I took the paper bag I could see that he was holding a gun, pointing it directly at me,” she explained.

“Give me the money,” was all the man said.

“I gave him all the Thai baht banknotes that were in the drawer, but I didn’t give him any foreign banknotes. After he left, I pressed the alarm,” Ms Chanya said.

Chalong Police today released an artist’s impression of the robber, based on the description given by Ms Chanya.

They are now broadening their search for the man.

A Phuket Star is born