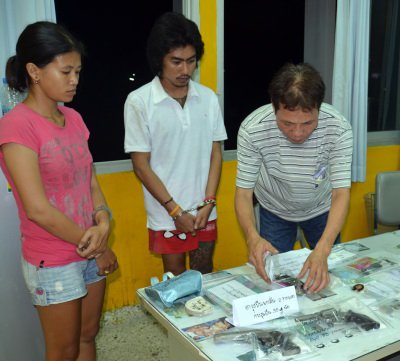 PHUKET: Phuket Police last night arrested a man and a woman in their 20s in possession of category one drugs at their home in Thalang. The couple are suspected of selling drugs to teenagers in the area.

Lt Col Prasan Towon, at about 11:20 pm last night, led a team of Thalang Police to raid an address in a housing estate in Baan Pon, situated near the Provincial Electricity Authority building on Thepkrasattri Road.

Police seized 649 ya bah (metamphetamine) tablets and 54 grams of ya ice (crystal metamphetamine) as well as two .38 handguns, a bank book, cash, a mobile phone and a list of the arrested pair’s alleged customers.

“Our investigation revealed that Mr Weerasak was selling drugs to local teenagers. We sent someone to buy a gram of ya ice and set up an appointment to collect it from the house,”Col Prasan explained.

“Mr Weerasak is just out of prison. He got the drugs from Bangkok, which were sent through the post. He would then divide the consignments and sell those [divisions] on to local teenagers,” he added.