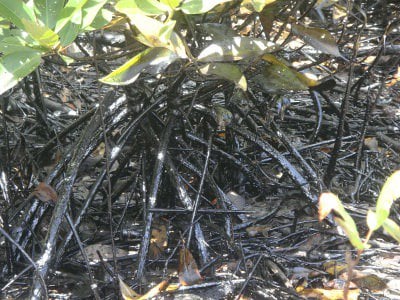 PHUKET: Krabi authorities have launched a massive cleanup operation after a boat struck rocks and spilled a large volume of oil into the sea, resulting in extensive damage to protected mangrove forests in Neua Khlong District, about 130 kilometers east of Phuket across Phang Nga Bay.

The spill was first reported at 9am Saturday morning.

How much oil was spilled is not known, but one local in an affected area in Khlong Khanan subdistrict reported oil lining 10 kilometers of coastline, with an estimated 1,000 rai of mangrove forest affected.

“This will affect wildlife and cause a lot of trouble for the environment and local residents. Government departments must do something to solve this problem immediately,” said Leb Chonlatee, 49, of Laem Kruad village.

Krabi Governor Prasit Osathanon ordered local authorities to act quickly on the spill. “This could endanger or even kill animals in the mangrove forest,” he said.

“The Krabi Provincial Electricity Authority cleaned up some of the oil floating on the sea, but there is still oil in the mangrove forest. I have assigned the relevant departments to inspect and clean up the affected areas,” he added.

However, Tossapol Chotechuang, chief of the Environment Department at the Ministry of Natural Resources and Environment Krabi Office, said that his team faced a dilemma how to conduct a clean-up.

“If we use dispersant chemicals to break down the oil, it would affect the local wildlife. It would be best to let nature heal itself,” he explained.

Surasak Mongkolchaiyasit of the Marine Office in Krabi said that the owner of the boat had been identified and has until Thursday to present himself.

“The boat, Aor Somsak, is now in Phuket for repairs. The owner has been told to report himself by Thursday,” he said.

“The owner must pay for the damage caused to residents and the environment,” said Mr Surasak.

The boat owner faces a fine up to 10,000 baht if officers find that the boat has been used for any purpose other than that stipulated in its registration documents.

“Allowing oil to leak into the sea carries a fine of up to 60,000 baht, up to three years imprisonment, or both,” Mr Surasak added.

Meanwhile, Governor Prasit also ordered for an immediate crackdown on fishing boats that have been modified to transport oil as cargo, a common practice among marine diesel smugglers.

“Anyone found breaking the law will be arrested. This is not the first time that we’ve had oil spilled into the sea,” he said.