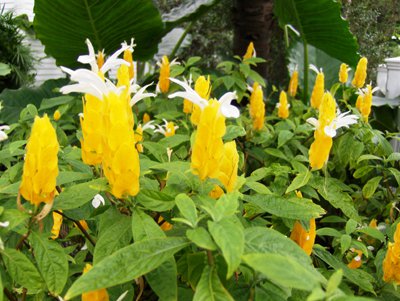 PHUKET: Few other yellow flowers can compete with the golden opulence of a sunflower, chalice vine or allamanda in full bloom. But that does not lessen the value of less spectacular garden inhabitants.

Take the galphimia or “shower of gold”, which is sometimes referred to as thryallis in books on gardening.

To give it a human epithet, this small, compact shrub is what horticulturalists like to describe as “busy”: it grows quickly and, given the right conditions, flowers abundantly. The yellow star-shaped blooms, which have small, spaced petals, are produced in dense panicles which open at the same time, giving the shrub an almost luminous appearance.

The small glossy evergreen leaves are borne on masses of slender stems, which are reddish when young. There is another form – glauca – which has foliage that is bronzy above and grayish-green below.

This import from Mexico is a tolerant plant, able to withstand short periods of drought. It can, moreover, be pruned with impunity. Given plenty of sun and adequate water, it should flower profusely. For those readers with terraces or patios, the shrub will do quite well in a large container.

More often, and in conventional garden settings, the shower of gold is found at the back of a perennial bed, or used, after the manner of ixoras, to make a vibrant and compact low hedge. It is, moreover, especially serviceable as a foundation shrub, since it can be planted immediately below a ground-floor window, and trimmed as soon as it reaches the sill. Not only a colorful bush, but a dense deterrent to anyone trying to break in to your house.

Also it can be valuable when planted on newly created slopes, where it will help to prevent soil erosion. Property developers please take note.

The golden shrimp plant (pachystachys lutea) is so called because it displays bright yellow, overlapping bracts that resemble the scales on a fish or crustacean. From these upright spikes which give rise to its two more colloquial names of “lollipop plant” and “golden candle”, which look a bit like the cones of a costus, emerge short-lived, white, and fairly insignificant tubular flowers. The golden spires are the thing; they are the reason why the plant is cultivated.

Unlike the galphimia, which is woody and may reach two meters in height, pachystachys is a soft-stemmed perennial, and rarely grows more than four feet tall. But it is a consistent bloomer, and viable as a potted plant, which will certainly turn heads on any patio. If you do decide to grow one in a container, note that it prefers slightly acidic soil – in common with most members of the acanthus family.

In the garden, it is mostly grown in clumps, to derive maximum benefit from the unusual bracts, which sit atop lots of large ovate evergreen leaves with prominent veining.

Although the golden shrimp plant hails from tropical America, it does not like full sun; so put it where it can enjoy some shade during the day. There is also a red variety – appropriately called coccinea – but I have not seen it in Thailand. Naturalized in parts of the West Indies, it would surely thrive here, as most imports, floral or human, usually manage to do.

I am frequently asked where plants can be purchased. Sadly, neither the galphimia nor the golden shrimp plant is easily located in plant nurseries on the island. A pity, because both are worth a place in your place.

If you are hell-bent on tracking them down, the Thai names are, respectively, phuang-thawng-ton and luang khiri-puun. Not easy to remember, but they can both be propagated from cuttings.

Tip of the week – Small-scale self sufficiency

Judging by the number of shop-houses and condos sprouting up around Phuket, an increasing number of residents are surrounded by jungles made of concrete instead of trees.

That trend is certainly borne out by the number of emails I get from apartment dwellers. In any case, the garden trend is towards flowers rather than vegetables. The presence of “farangs” doesn’t help. Most of us never had our own kitchen gardens back home. One solution is to grow veggies – literally – in your own back (or front) yard. That means making the most of whatever space and light you have. If your terrace/patio gets less than four or five hours of sun a day, you can shelve any notions of small-scale self-sufficiency If space is limited, opt for container plants that require relatively little room in which to grow.