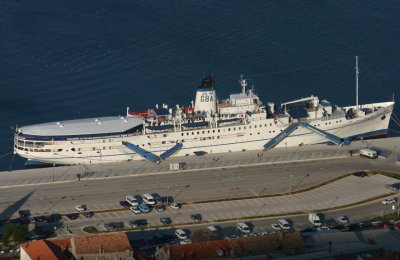 PHUKET: The MV Doulos, the world’s oldest ocean-going passenger ship – it was built just two years after the Titanic sunk – is returning to Phuket for the first time in 10 years.

The Malta-registered liner is now operated by Gute Bücher für Alle (GBA), a private non-profit organization based in Germany that has worked since 1977 to promote good education and international understanding by staging book fairs and cultural exchange programs.

The ship has visited more than 100 countries in Latin America, Africa, Europe, Asia, and the Pacific region, and more than 18 million people, including royalty, presidents, prime ministers, and sheikhs have come aboard the ship since GBA began running it.

The Doulos has the largest floating bookstore in the world. It stocks titles covering a wide range of subjects including science, sports, hobbies, recipes, arts, philosophy and children’s books. GBA has a policy, however, not to sell any books of a political or pornographic nature.

Admission for adults will be 10 baht. Children under 16 will be admitted free but must be accompanied by an adult. For more information visit the ship’s website at www.mvdoulos.org.