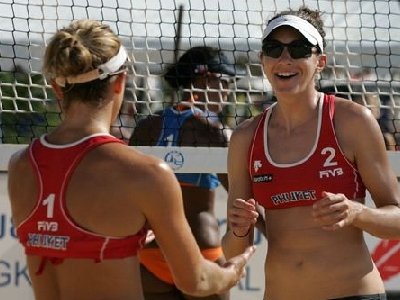 PHUKET: Spectators at the opening matches of today’s play in the US$190,000 Phuket Thailand Open were treated to an impressive display of raw determination on Karon Beach.

“We took ourselves by surprise but when we were playing we felt like we were right there with them. It was really windy this morning and we got a couple of lucky breaks.”

Maloney added, “We stayed really patient. In the second set they served us off the court but we stuck with it.”

The Canadians went on to defeat Thai duo Kamoltip Kulna and Yupa Phokongploy, seeded 10th in the tourney.

Tomorrow Bansley and Maloney will play Sara Goller and Laura Ludwig from Germany, second-seeded and so far undefeated in the tourney, the final event on the 2010 Swatch FIVB World Tour.

Elsa Baquerizo and Liliana Fernandez Steiner from Spain scored an upset win of their own, defeating fourth-seeded star players Nicole Branagh and Kerri Walsh of the USA 21-12, 21-18.

The Spanish ladies will take on fifth-seeded Kristyna Kolocova and Marketa Slukova of the Czech Republic tomorrow.

Top seeds Chen Xue and Xi Zhang of China recorded their eighth straight sweep with a pair of wins to open play in Phuket.

Kolocova and Slukova also remain unbeaten, but were forced to earn both their victories today.

They lost the opening set against a qualifying team from Germany before bouncing back to win the next two sets and the match.

Brazilian sisters Carolina and Maria Clara Salgado swept both of their opponents today and will play against Xue and Zhang tomorrow morning.