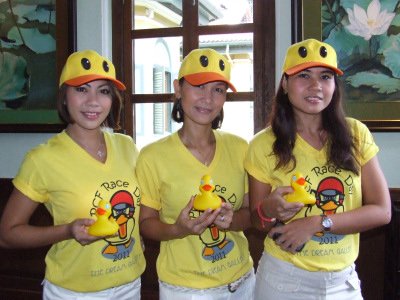 Making the announcement at the Blue Elephant restaurant in Phuket Town, Alasdair Forbes, Vice President of the PCF and chair of the Race Day organizing committee, confirmed the event will include dragon boat, kayak, raft and cardboard box races.

As for the popular rubber duck race, he said the PCF was looking forward to setting a record number of entries. “Last time there were 1,000 ducks. This time there will be many more,” he said.

The big attraction for the rubber duck race is the prizes. “There are over a million baht’s worth of prizes for the duck race, including a three-day cruise on the five-star wooden sailing yacht Silolona – for 10 people.

Tickets to enter the duck Race cost 150 baht and are now on sale at about 30 locations around the island. They are also available online through the PCF website: www.phuketcharity.org

Entertainment on Race Day will include a performance by master illusionist Joe Conrad, who gave the crowd at Blue Elephant today a taste of his fun trickery.

Other activities on Race Day include a Delightful Duckies costume contest for little girls, a dance show, a live band, rides in vintage cars from the Phuket Classic Car Club, a “beat-the-goalie” competition and an arts corner for quieter kids.

“Motorbikes with no taillights on a dark road are in serous danger of being rammed from behind, yet we estimate that roughly one in 12 bikes on the roads of Phuket has a broken tail light.

“Replacement bulbs cost just 20 baht. Working with local motorbike dealers who provide bulbs free, Kusoldham Foundation who provide traffic control and students from Technical College who replace the bulbs, we have in the past 18 months or so replaced bulbs on 800 bikes,” Mr Forbes explained.

“We hope we have saved more than a few lives,” he said.

Full details of the event, and of the host of other prizes up for grabs, are available on the PCF website.

The Phuket Gazette is a founder donor of the PCF.