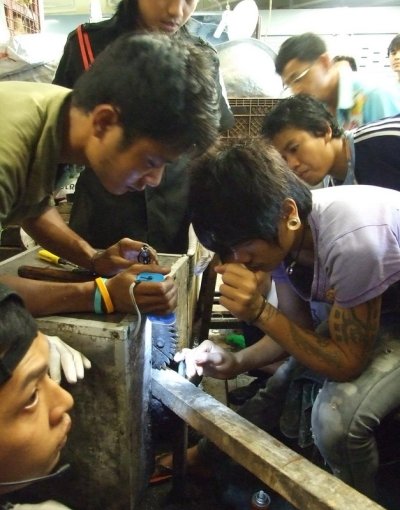 PHUKET: The new Phuket City Municipality fresh market on Ranong Rd claimed its first emergency early this morning when rescue workers were called to free a young man’s hand that was jammed in a coconut peeling machine.

Kusoldharm Rescue Foundation workers arrived at about 4am and took more than an hour to free the hand, still attached to 19-year-old Burmese worker Mr “A”.

Mr A was new to coconut peeling and not used to operating the machine. The gearwheel caught his glove and pulled his hand down onto a sharp spike that impaled his ring finger.

Rescue workers first used a thick piece of wood and a crowbar to pry apart the small machine to get a better look at the situation.

The rescuers pried the gearwheel off and Mr A, who had become noticeably weak, pulled his own finger off the spike.

Mr A, who works at a shop in the market that produces fresh coconut milk, was taken to hospital.

It has not been reported whether he will be able to keep his finger.