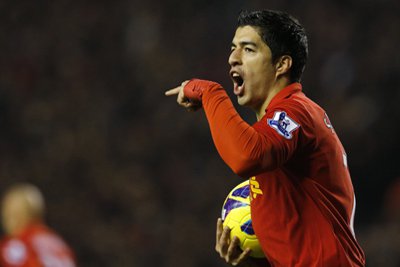 PHUKET: Liverpool talisman Luis Suarez is happy for opposition supporters to jeer him as it only serves to motivate him more, the Uruguayan said yesterday.

Suarez has become a target for boos from the stands in England after he received an eight-match ban last season for racial abuse directed at Manchester United’s Patrice Evra before refusing to shake the Frenchman’s hand earlier this year.

That incident prompted United manager Alex Ferguson to label the striker a “disgrace” while this season he has also come under fire for some theatrical tumbles to the ground.

In the recent Merseyside derby against Everton Suarez celebrated a goal with a comical dive in front of Everton manager David Moyes who before the match said Suarez had a reputation for going to ground too easily.

“I think you need to really know a person before you criticise them or speak out about them,” the 25-year-old Suarez told Liverpool’s website.

“I think sometimes the opposition fans are more interested in booing Luis Suarez for the problems he had or because he’s gone down for something than they are in their own team.”

“I think our fans are the perfect example and always show how to help the team by wanting to get behind the side,” he said. “That’s what the other clubs’ fans need to do – get behind their own side and not just think about Suarez, because all that does is motivate me even more to do well.”

Suarez, who made headlines for the wrong reasons at the 2010 World Cup when he was sent off for a blatant handball on the goalline against Ghana, moved to Anfield from Ajax Amsterdam in January 2011 and has scored 32 goals in 68 appearances.

His form, and Liverpool’s poor start to the season, have triggered speculation about a move, but manager Brendan Rodgers said he is not going anywhere.

“There will be no bidding war. He is staying here,” Rodgers said. He’s certainly not someone we want to sell or move on.

“He has been a brilliant player to work with and we want to add to our squad – not take people out of it, especially a world-class player.”

Suarez said he is thriving under Rodgers.

“As a player, it’s vital to have the backing of your manager and so I think that the confidence Brendan is showing in myself and the team as a whole is very important and it’s down to us to repay that trust out there on the pitch,” he said.