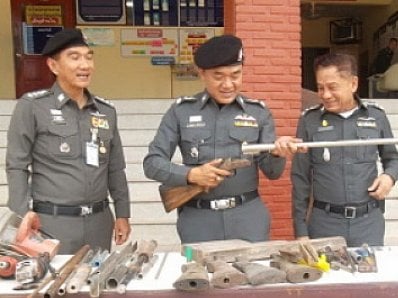 PHUKET: Krabi Police are on the lookout for a gunsmith who is now on the run after officers raided his illegal firearms workshop at a mangosteen processing plant in Nuea Klong District, across the bay from Phuket, yesterday.

Provincial Police Commander Nunthadej Yoinual led a team of more than 10 police officers to raid a bungalow at the plant at midday.

During the raid, police seized “hundreds of items” of equipment related to the fabrication of firearms, including completed gun parts, said Maj Gen Nunthadej.

“The raid follows the arrest of a teenager in possession of a gun who told us who sold it to him,” he added.

Gen Nunthadej told the media that the workshop owner, 37-year-old Meechai Butrapian, is still at large and an arrest warrant will be issued for him.

“Our inquiries revealed that Mr Meechai is a former ironworker. He now uses those skills to produce custom-made weapons,” Gen Nunthadej said.