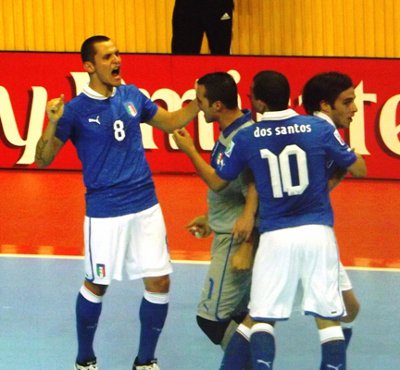 PHUKET: Both semifinals of the FIFA Futsal World Cup will be played this evening at the Indoor Stadium Huamark, Bangkok, with the stage set for an epic Europe – South America final.

The first semifinal is an all European affair between Spain and Italy.

Spain started the competition as one of the favorites and they finished joint top of Group B with Iran.

Spain then went on to break Thai hearts eliminating the host nation in the second round 7-1.

They then faced their sternest test of the tournament against Russia, who had scored 30 goals and conceded none en route to the quarterfinals.

Russia took an early lead, but three goals in 15 minutes turned the game in Spain’s favor and they eventually ran out 3-2 winners.

Midfielder Torras is one of six Spanish players plying his trade for Barcelona’s futsal team and the understanding these players bring from their successful club team will only enhance an already formidable national team.

Spain’s semifinal opponents, Italy, topped Group D and knocked out Egypt 5-1 in the second round.

In their quarterfinal match against Portugal they fell behind 3-0 after an inspired Ricardinho scored a hat trick in the first 12 minutes.

Italy fought back and a last minute equalizer from Fortino took the match into extra time, with Humberto Honorio grabbing the winning goal in the second minute of added time.

The other semifinal will feature an all South American match up between Brazil vs Colombia.

Brazil, like Spain, were pre-tournament favorites and in the six previous World Cups only Brazil (4 times) and Spain (2 times) have emerged victorious.

Brazil strolled through as Group C winners but suffered an early set back when star player Falcao suffered an injury that threatened to keep him out of the tournament.

A 16-0 demolition of Panama in the second round was perfectly topped off by the earlier than expected return to action of Falcao, who scored the last goal of the game after coming on as a substitute.

The defending world champions’ quarterfinal against regional rivals Argentina was a nervy encounter.

Argentina took a shock 2-0 lead forcing Brazil to fight back and through a late Falcao goal, the went game into extra time.

Falcao scored the winning goal in extra time to take Brazil through to the semifinals as 3-2 winners.

The surprise package of the tournament, Colombia, finished second in Group F with one victory and two defeats. The unfancied South Americans knocked Iran out 2-1 in the second round and followed that shock up with a 3-1 quarter final victory over Ukraine.

Colombia have adopted a defensive mentality, hitting their opponents on the counter attack.

Midfielder Andres Reyes has been Colombia’s stand out player in the knock out stages and the play-maker will need to be at the top of his game to help his team get past Brazil.

Semifinal schedule is as follows:

All games will be broadcast live on terrestrial channel 9.