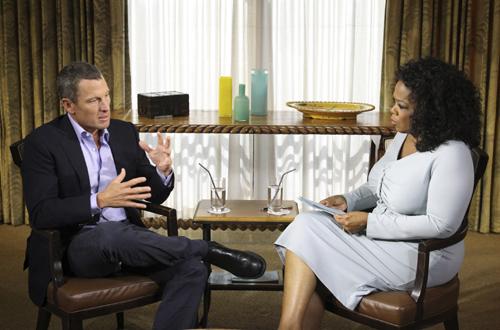 PHUKET: Lance Armstrong could be jailed and cycling could be dropped from the Olympics as a result of the disgraced American athlete’s reported admission that he had used performance-enhancing drugs during his racing career.

USA Today and other media said on Monday that Armstrong confessed to the doping in an interview with Oprah Winfrey to be aired later this week. The talk show host confirmed the reports on Tuesday in an appearance on the “CBS This Morning” show.

“I’m sitting here now because it’s already been confirmed,” Winfrey, who interviewed the Texan for more than two hours on Monday in a hotel in Austin, Texas, told CBS.

It will not come as a great surprise that Armstrong admitted he cheated his way to the top. The mountain of evidence against him was already overwhelming and the pressure to confess was building.

From the moment it was announced last week that he had agreed to the interview with Winfrey, it was widely expected that the 41-year-old cancer survivor would make some sort of confession but even Winfrey was surprised by what he said.

“He did not come clean in the manner that I expected,” she said, without elaborating on the specifics.

“For myself, my team, all of us in the room, we were mesmerized and riveted by some of his answers.

“I didn’t get all the questions asked, but I think the most important questions and the answers that people around the world have been waiting to hear were answered.”

If a damning confession emerges, Armstrong faces the prospect of jail time, according to at least one lawyer, and the return of millions of dollars in repayments for lying about his alleged use of performance enhancing drugs during his career.

Armstrong already had been banned for life and stripped of his race wins, including seven Tour de France victories, after a US Anti-Doping Agency report last year described him as the ringmaster of the “most sophisticated, professionalized and successful doping program that sport has ever seen.”

But he had always denied the accusations made against him, which involved anabolic steroids, human growth hormone, blood transfusions and other doping.

Andrew Stoltmann, a Chicago attorney, said an admission that he lied and cheated his way to the top could have serious legal implications for Armstrong.

“Having previously testified under oath and denying the doping allegations, Armstrong’s admissions would make perjury or obstruction of justice charges a relatively easy charge for prosecutors,” Stoltmann said.

“His past sponsors, including Nike, Anheuser-Busch and even smaller brands like FRS and Honey Stinger, could potentially sue him for brand damages associated with his admission.”

CBS reported Armstrong was in talks about repaying part of the taxpayer money he earned during his career and might be willing to testify against others involved in illegal doping.

That could open up the possibility of a reduction in his lifetime ban but only if he owned up to the World Anti-Doping Agency (WADA).

“Only when Mr. Armstrong makes a full confession under oath – and tells the anti-doping authorities all he knows about doping activities – can any legal and proper process for him to seek any reopening or reconsideration of his lifetime ban commence,” WADA Director General David Howman said in a statement.

Cloud over cycling
Cycling, one of the showcase sports at the Olympics, also could possibly be kicked out of the Games if the sport’s officials are implicated, International Olympic Committee (IOC) member Dick Pound told Reuters.

“The only way it is going to clean up is if all these people say ‘hey, we’re no longer in the Olympics and that’s where we want to be, so let’s earn our way back into it,'” Pound, a former WADA boss and current International Olympic Committee member, told Reuters.

The International Cycling Union (UCI) has already acknowledged it received a US$100,000 donation from Armstrong in 2002 but has denied the money was part of covering up a positive drug test.

The UCI recently set up an independent commission to investigate the case and wants Armstrong to testify under oath.

“The UCI notes the media speculation surrounding the interview and reports that he has finally come clean and admitted doping during his cycling career,” the union said.

“If these reports are true, we would strongly urge Lance Armstrong to testify to the independent commission established to investigate the allegations made against the UCI in the recent USADA reasoned decision.”

Armstrong’s interview with Winfrey will be broadcast over two nights – at 9:30pm EST on Thursday (9:30am Phuket on Friday) and 9pm EST on Friday (9am Phuket on Saturday).