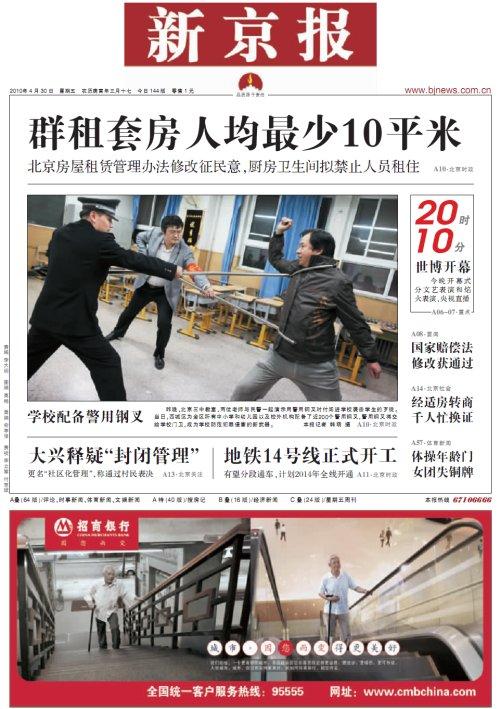 
How a feisty Chinese newspaper stood up for press freedom
Reuters / Phuket Gazette
PHUKET: Journalists at the Beijing News were at home late one night last week when their mobile phones started ringing. Colleagues in the newsroom were telling them of a showdown between the newspaper’s management and propaganda department officials.

That afternoon, propaganda officials had come to see publisher Dai Zigeng and editor Wang Yuechun to demand that the paper heed a government directive to publish an editorial by the nationalist Global Times, denouncing protests against censorship at another paper, the Southern Weekly.

But the Beijing News was resisting.

In a country where newspapers usually toe the government line, the defiance by the Beijing News was remarkable. Not since the 1989 Tiananmen Square protests had reporters banded together in such a dramatic way for the cause of press freedom.

The challenge by both the Southern Weekly and the Beijing News highlights a pivotal struggle between media increasingly pushing for independence and a Communist Party government that brooks no dissent to its rule.

That night at the Beijing News, Dai and Wu called a meeting with a small group of staff – mostly editors, though reporters who were close to the office rushed back. They asked for opinions about running the editorial criticising the Southern Weekly.

Everyone opposed it despite a threat from the authorities to shut their paper down, said a senior Beijing News editor who gave Reuters a detailed account of the turmoil in the newsroom.

“The Global Times’ definition of it was wrong, we all knew that it wasn’t true,” said the editor, referring to the editorial denouncing the Southern Weekend protests.

“To publish something like that at this time would be helping someone commit evil,” said the editor, who declined to be identified saying his newspaper’s management had ordered staff not to talk about the incident to other media.

The Global Times, owned by the party mouthpiece the People’s Daily, blamed overseas forces for inciting the Southern Weekly protests and said China was not ready for dramatic media reforms.

The talks between the Beijing News and the propaganda officials went on into the night.

Dai, who had built the Beijing News into a title known for feisty reporting and commentary, told the officials that he might as well resign if the government was forcing the paper to print something against its will.

But despite that, in the end, after resisting the government directive for two days, the Beijing News decided it had to obey.

Some journalists wept, the editor said: “Everyone’s emotions were running high, we all found it difficult to accept.”

But in an unusual deal hammered out between Dai and the propaganda officials, the Beijing News was able to cut the editorial down to 400 characters, bury it on page 20 and print it under a different headline.

It was an acceptable solution for both sides, said the editor. Neither Dai nor the Beijing propaganda department were available for comment

But the deal might just signal the end of the first round of a long struggle rather than a lasting peace.

The fate of both the Beijing News and the Southern Weekly, where the dispute was settled with a compromise, will be closely watched as a test of new Communist Party chief Xi Jinping’s commitment to political reform.

“Idealistic”
The challenges by the newspapers could set the stage for tighter restrictions. Although no one expects the protests to spread nationwide, the use of social media has amplified support for the press among many people.

In a sign of nervousness over the media protests, terms related to both incidents have been blocked on China’s Twitter-like microblogs, which would appear to show the government is a long way from loosening controls.

“My fear is that under Xi Jinping, the media will have to go through another round of tighter control because of the tendency of the propaganda department to do their own job of controlling the media,” said Bo Zhiyue, a professor of Chinese politics at the National University of Singapore.

In the end, Dai never resigned. At a forum in Beijing a day after his showdown with the authorities, he spoke forcefully about the mission of his newspaper.

“The people at the Beijing News are still pure, professional people with strong journalistic ideals,” Dai said. “We sincerely hope this newspaper … is able to be the voice of the people.”

The Beijing News was started in 2003 as a joint venture between the Southern Daily newspaper group – the owner of Southern Weekly – and the politically prominent Guangming Daily, which controls 51 percent of the paper. The Beijing News has a circulation of about 730,000.

The editor at the Beijing News described Dai as idealistic and his defiance angered the authorities. “The higher-ups felt that certain media were being very stubborn in not republishing, and were annoyed.”

“The background to this is that a new leadership team to guide ideology had just been installed and they want to establish some authority.”

A bespectacled man with floppy hair, Dai pushed the newspaper to write notable stories that included exposing how local governments were using loopholes in a land policy initiative to seize land from farmers in 2010. The reports prompted adjustments to the policy.

The latest incident was not the Beijing News’ first run-in with the government. In late 2005, authorities removed the newspaper’s chief editor in what observers said was a move to strengthen party control over the media.
Coded tribute?
On the same day the Beijing News had to publish the editorial, it ran a piece lauding “porridge from the south” in its lifestyle section, in what many saw as a tribute to their colleagues at Southern Weekly. In Chinese, “porridge” sounds like the first Chinese character in “weekend”.

“Just set upon the table, the porridge still writhes with heat,” the Beijing News wrote. “Perhaps it still has a heart of courage.”

Other newsrooms have been pushing back. When some papers published the editorial as directed, they issued disclaimers saying it did not represent their views.

At least two newspapers – the China Youth Daily and the Oriental Morning Post – did not carry the editorial. Representatives said they didn’t know whether the newspapers had received the order to do so.

Some of China’s biggest news websites arranged their headlines so the first Chinese character on each line spelled messages such as “Southern Weekly, onward!”

“This is the first time in China’s history, with the exception of June 4th, that there’s been such a large-scale collective protest by Chinese journalists against the central government’s propaganda department’s restrictions and suppression,” said Cheng Yizhong, who co-founded the Beijing News with Dai, referring to the Tiananmen Square protests.

But Cheng said he expected no improvement in freedoms, predicting authorities would try to pre-empt any direct challenges by strengthening controls over social media. Cheng was arrested in 2004 on embezzlement charges that his supporters said were politically motivated. He was later released.

The editor at the Beijing News said management had warned staff not to talk about the incident, especially to