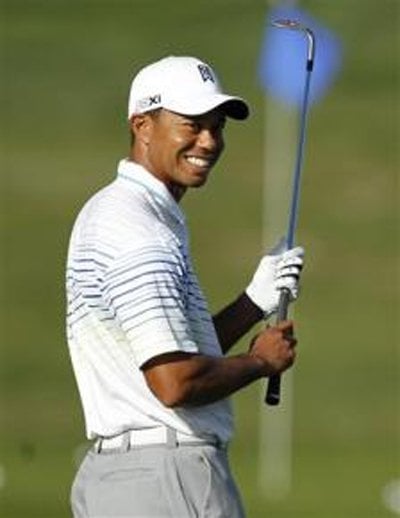 PHUKET: With a widely expected ban on anchoring long putters likely to be announced by the game’s ruling bodies today, players have expressed sharply contrasting views ahead of this week’s World Challenge.

While 14-times major winner Tiger Woods and putting supremo Steve Stricker are both in favour of such putters being outlawed, 2011 PGA Championship winner Keegan Bradley says he is “not happy” about the likely rule change.

American Bradley became the first player to win a major title using a long putter and has since been followed by compatriot Webb Simpson, at this year’s U.S. Open, and South African Ernie Els, at the British Open in July.

“I’m obviously not happy with the ruling, but I respect the USGA (United States Golf Association),” Bradley told reporters at Sherwood Country Club while preparing for tomorrow’s opening round.

“They make the rules, and I’ll adjust appropriately. I’m going to accept the challenge and hopefully do well when they do ban it.

“Players are very passionate about this decision. You’ve got some guys who have been using this style of putter for almost 20 years so it’s a little bit of a scary position that they’re in.”

While the long putter itself is not expected to be outlawed when the USGA and the Royal and Ancient (R&A) hold a joint teleconference call, a ban on anchoring the club to any part of the body is expected to be announced today.

The use of an extended putter seems to be totally at odds with the spirit of the game, but it has played a key role in reviving the careers of several players who have suffered from the yips, or the putting twitches.

Broomhandle or belly putters, pioneered by 2002 European Ryder Cup captain Sam Torrance among others during the late 1980s and early 1990s, are tucked under the chin, against the chest or into the belly.

They are swung in a pendulum fashion, and crucially make demands on a different set of small muscles and nerves.

“I just believe that the art of putting is swinging the club and controlling nerves and having it as a fixed point is something that’s not in the traditions of the game,” said Woods, the World Challenge defending champion and tournament host.

“We swing all other 13 clubs. I think the putter should be the same. It should be a swinging motion throughout the entire bag.

“One of the things that I was concerned about going forward is the kids who get started in the game and are starting to putt with an anchoring system. Everyone always copies what we do out here.”

Best putters
Fellow American Stricker, long regarded as one of the best putters in the game, agreed.

“Any time you can take your arms and hands out of it, especially your hands, when you can anchor it in your chest is a huge advantage,” Stricker said.

“I’m not a big proponent of long putters, but there’s going to be a lot of upset people, a lot of guys that have putted with a long putter for a long time.”

Simpson, who switched to the belly putter in 2004, says he has seen no evidence in the PGA Tour’s ‘strokes gained over the field’ putting statistic that the longer putter gives players any advantage.

“To change something that drastic, it needs to be based off facts and not what certain people think the tradition of the game looks like,” said Simpson.

“So that’s why I’ve thrown out that nobody in the top 20 last year in strokes gained was using a belly putter or long putter. This year I believe there is only one person.”

Should a ban on anchoring the putter be announced today, the rule will not come into effect until 2016 and Simpson says he will be ready for it.

“I’ve been working with a short putter now for a couple years every time I go home,” he said. “I expected the day to come, and so I just wanted to be ready.

“I didn’t want to be shocked. I’m ready to implement the short putter at any time now.”