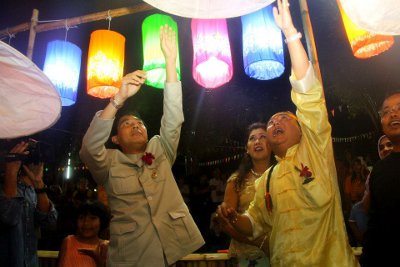 PHUKET: As communities across Phuket celebrate the Loy Krathong Festival tonight, residents in Srisoonthorn, Thalang, will be drawing to a close their three-day version of the festival.

Phuket Governor Maitri Inthusut officiated at the opening of the Srisoonthorn festival, which this year also honors the area’s tin-mining history, at the Bang Maruan Lagoon – located next to the site of the old Bang Maruan Mine.

“Over the past 40 years, Phuket has changed its focus from tin mining to tourism. Today, a lot of tourists come to Phuket and this event gives those tourists the chance to appreciate the traditional lifestyle of the local people during the tin mining days.

“It also preserves local history, so that the next generation will be able to study and carry on local traditions preventing them from being lost to time,” he added.

Srisoonthorn Municipality Mayor Worrawut Songyot explained that the festival is significant to the local community.

“This is the second time we have held our Loy Krathong festival under the theme: Kid Thung Tairang Tee Bang Maruan [“Missing the old days of Bang Maruan”]. The event gives visitors a chance to learn how the people who worked at the Bang Maruan Mine used to live,” he explained.

Among the highlights of the festival is a full-sized replica of a tin mine sluice, which demonstrates how the tin was separated from the sludge, as well as three-wheeled rickshaws used to ferry Phuket notables of the day.

“Other activities to be held throughout the festival are stage performances, a nong noppamas beauty pageant for children, stalls selling One Tambon One Product items, classic Thai movies shown on a large screen and traditional fun activities, as well as a light and sound performance and fireworks,” Mayor Worrawut said.

“Hopefully, visitors will find the festival enjoyable and be impressed by our local traditions and cultural heritage,” he added.

World Golf: Long putter expected to be outlawed for 2016