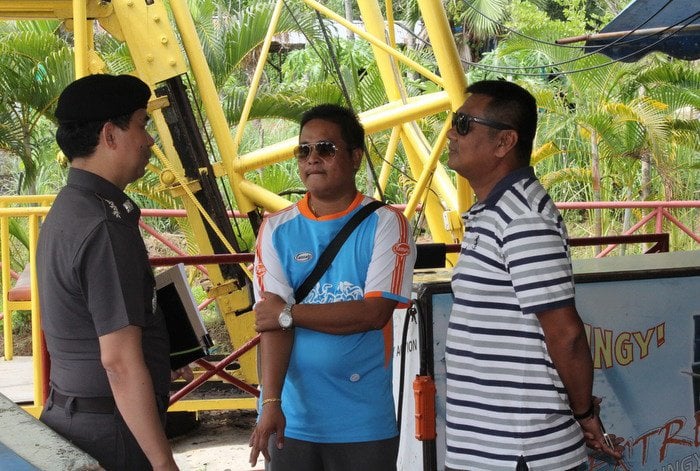 PHUKET: World Bungy Jump in Patong closed its doors for good and demolished its bungy-jump tower on Monday after a tourist suffered fatal injuries during a jump last month.

“The owner, Vinat Chanthornwiboonkul, decided on his own to close the business. We don’t want to put anyone at risk at our bungy jump, and we are very sorry about the death of Abdullah Adel Kadhmbadman,” said Kullanan Samnuk, a representative of World Bungy Jump.

“We encourage other entrepreneurs to take tourist safety seriously as well.”

The facility was forced to temporarily close (story here), while officers continued to investigate the death of Mr Kadhmbadman, who died after jumping from the 30-meter bungy tower on May 27 (story here).

Patong Mayor Charlermluck Kebsup confirmed today that Mr Vinat had shut the business down of his own accord.

“He will not be re-opening the bungy jump,” Mayor Charlermluck added.

Despite having told the Phuket Gazette earlier this month that police would not wait for autopsy results before charging Mr Vinat for reckless endangerment, Maj Teerasak Boonsang of the Patong Police said today that they had not yet charged him, and that they in fact have to wait for the results.

“We have been ordered to wait for the results to come back from the Office of Forensic Science in Bangkok. We expect to receive them in about two months,” he said.

“We need to attach them to our file before we can hand it to the Public Prosecutor. If the prosecutor thinks that lack of safety measures caused the death, we will press the charges.”