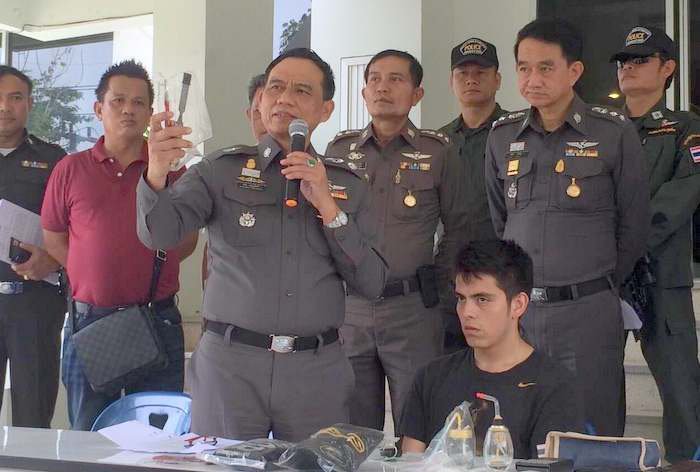 PHUKET: Police have arrested two Colombian suspects for the professional-style robbery of a car in the parking lot of Tesco Lotus Thalang on Sunday (story here).

Daniel Guerrero Ariza, 28, and Jean Ortega Duarte, 21, were arrested on Monday when they went to return a car they had rented from a shop in Ao Nang, Krabi.

Both men have denied robbing the car at Tesco Lotus, though admitted that they had taken the rental car to Tesco while touring Phuket with two other friends, another Colombian and a Mexican, said Phuket Provincial Police Commander Patchara Boonyasit at a press conference today.

“Krabi Police made the arrest when the men returned to collect a fake Italian passport that Mr Ariza had used to rent the car. Once apprehended, it was easy to identify them as the suspects were caught on camera during the robbery,” Maj Gen Patchara said.

Police are continuing their hunt for the two other suspects, confirmed Maj Gen Patchara.