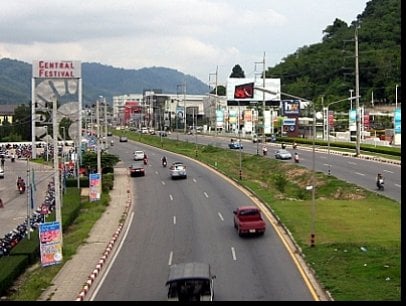 PHUKET: The leading engineer heading the project to build Phuket’s first underpass at the Darasamuth Intersection, located in front of the Central Festival Phuket shopping mall, today confirmed that work will commence on November 21.

Speaking at a meeting at the Phuket Highways Office in Phuket Town this morning, Itiwatra Kritsanavanich said that the inside lanes on the north side of the junction will be blocked off with concrete barriers to allow workers to start cutting down the trees on the median strip.

The lane closures will leave two lanes northbound through the junction unaffected, but southbound motorists wanting to turn right, heading toward Kathu and on to Patong, are advised to turn right earlier – either at the Samkong Intersection (in front of Tesco Lotus) or into Bang Yai Road, which runs behind the Big C shopping center.

“From November 21 to the end of the month, we will put the concrete barriers in place so we can prepare the site before we start excavating and installing the retaining walls at the beginning of December,” Mr Itiwatra explained.

“Warning signs will be posted to let motorists know about the project and we have sent a file to Central Festival to print and hand out to customers so they will be aware of the project and know of the alternative routes available in order to avoid the intersection during construction,” he said.

The issue of making alternative routes available came to a head in September when engineers from Italian-Thai Construction Co Ltd, the contractor hired to build the 600-million-baht underpass, held a public meeting to gain feedback and suggestions from local residents on the impact the construction work will have on commuters.

(Click here to see a large map of the area and suggested alternative routes presented at the meeting.)

“We will have another public feedback meeting to follow up on the construction progress next month,” Mr Itiwatra told the Phuket Gazette.

World Sports: Update of action and news from across the globe