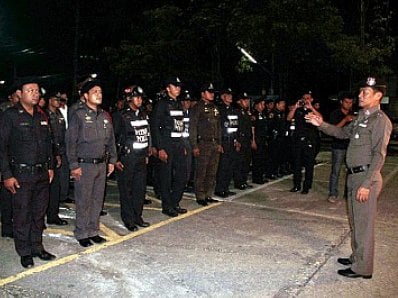 PHUKET: In a 12-day blitz on youth crime in Phuket Town, Phuket City Police arrested 220 people on drugs and weapons charges – and six youths for attempted murder after being caught in two separate gang sword fights at Saphan Hin.

“In that time, we arrested 220 people for possession of illegal weapons, as well as for drug possession, use, sale and distribution, and others were arrested for gambling and prostitution.

Although the number of arrests reported included all arrests made during the period, such as the arrest of bank robber Anusit Kaewmiookda, Col Sermphan explained that the campaign was intended to specifically target youngsters in Phuket’s capital.

“We had one team of officers stationed at a checkpoint set up near Phuket Technology College on Thepkasattri Road on the north side of Phuket Town, and another team of officers dedicated to raiding night venues throughout the town,” Col Sermphan said.

The six teenagers arrested for attempted murder were caught amid two separate gang fights at Saphan Hin, he added.

“The gangs were fighting with swords and long knives. We arrested many youths in those two incidents. One gang fight was on October 25 and the other was the very next night,” explained Col Sermphan.

In light of the recent rise in gold shop and bank robberies on the island, Col Sermphan said that he had boosted patrols in areas where bank branches and gold shops were located.

However, he also advised that gold shop owners and branch managers take a leaf from confessed bank robber Anusit’s book, and have security guards on the premises.

“We would like to tell every gold shop owner and bank branch manager that we will keep your business secure. However, please protect your own business. Please look into whether hiring a security guard is needed to protect your business from crime,” Col Sermphan added.