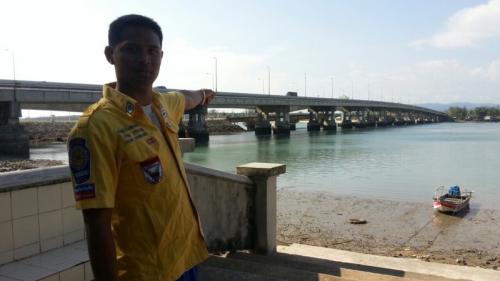 PHUKET: A woman died after leaping from Phuket’s Thao Thepkrasattri Bridge this afternoon.

Local resident Arun Wanayao, 22, explained that he saw Ms Khemmanit alight from a bus and wait at the roadside passenger shelter in front of the Tah Chat Chai temple.

“She was crying and asked me to take her to the bridge to meet her friend. I said I couldn’t, as I had other errands to run, so she decided to walk alone,” Mr Arun said.

“I went back to see her, but I couldn’t find her. I went looking for her and rode my motorbike to the area under the bridge – and I saw her jump,” he said.

“I called for people nearby to take a longtail boat out to rescue her and to call the local rescue foundation, but it was too late,” Mr Arun added.

“We found villagers helping the woman. She had suffered serious injuries from the fall,” he said.

Rescue workers rushed Ms Khemmanit to Thalang Hospital. However, she was pronounced dead on arrival.

“We collected her bag and shoes, which she placed on the road before jumping off the bridge,” Capt Santi said.

“We will question witnesses and collect more evidence in the hopes we can learn more about the circumstances that led to her death,” he added.