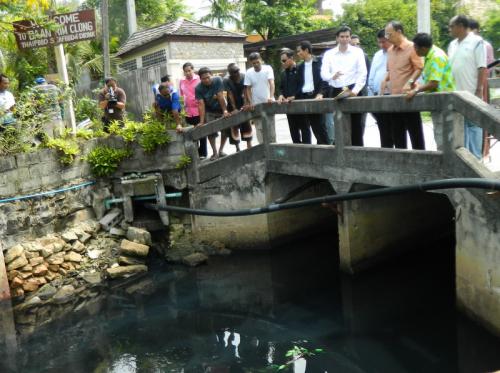 PHUKET: Hotels and businesses located along the canal that empties onto Bang Tao Beach will be inspected and forced to conform to wastewater-treatment standards, Government Spokesman Prompong Nopparit has announced.

The news follows the public exposure of dirty water in the canal that has caused a rash of health problems for tourists and local boatmen in the area, some of whom have even been hospitalized for blood infections (story here).

At the first site, near the Dalah Resort, Mr Prompong and his entourage of environmental experts found no dirty water in the area.

“At the next site, near Billy Bridge, the water started to get dirty. At the last site, near Bang Tao Bridge, two kilometers from the second site, the water was very dirty and smelly,” Mr Prompong told the press.

“There are many hotels, restaurants, bars, car wash shops and houses near the second and third locations we visited. The dirty water from these sources have caused many people to have skin problems,” he said.

“The long-term solution is to set up a wastewater-treatment system in the area. We are working on it and expect it to be operational within the next two years,” he added.

Mr Prompong ordered the Cherng Talay Administrative Organization (OrBorTor) to set up a task force to inspect businesses along the canal to ensure that they have adequate wastewater-treatment tanks installed.

“If they do not, they will be told not to release wastewater into the canal. If they do not comply, we will press charges against them,” he warned.

Mr Prompong also called on local villagers to not discharge untreated wastewater into the public waterway.

Akkarawat Hirunphun, director of the Phuket-based Regional Environmental Office 15, said tests conducted by his officers confirmed that the water in the canal at all three locations visited yesterday had average Biological Oxygen Demand (BOD) readings well over the legal standard.

“Almost all the fish in the canal have died,” he said.

“However, the Cherng Talay OrBorTor did not talk about this with the sub-district chief or village headmen in the area, so they did not know anything about what was being done,” he said.

Vice Governor Somkiet told the press that he ordered the Cherng Talay OrBorTor to dredge the canal wider so that the water would flow unimpeded into the sea, giving bacteria less opportunity to develop to dangerous levels.

“I also ordered the Thalang District Office and Cherng Talay OrBorTor officers to invite the owners of restaurants, bars and hotels along the canal to meet and discuss possible solutions to the problem,” he said.

“The relevant officers will be called in again to explain what progress has been made,” he added.

Woman leaps to her death from Phuket bridge