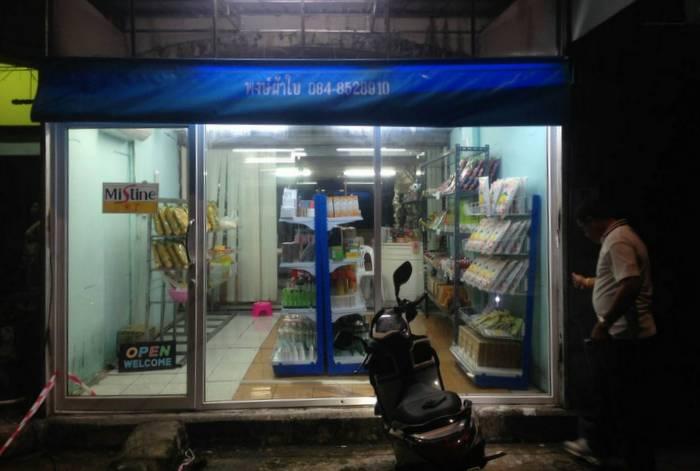 PHUKET: Police are searching for suspects who allegedly shot a woman in the head yesterday morning in Phuket Town.

Phuket City Police responded to a reported attack on a souvenir shop on Phang Nga Road a little after 4am.

The Phuket Gazette has confirmed that the woman is a hilltribe, non-Thai citizen from Chiang Mai, named Wenlang Sae-Lee. The 22 year old was found lying in a pool of blood, after being hit by a 9mm bullet above her left eyebrow.

Ms Wenlang’s bereaved husband, Tajer Sae-Kwang, 31, told police that the couple was having drinks siting in the shop with two friends when the shooting began.

Police reported that a blue awning was covering the shop entrance at the time of the shooting, as the shop was closed.

“The bullets came from out of nowhere,” Mr Tajer said. “We had no idea who was shooting at us.”

Police said CCTV footage showed two men walk up to the front of the shop and fire seemingly randomly into it before running away. Four bullet cases were recovered from the scene.

“We are keen to arrest the suspects as soon as possible,” said Lt Col Taksin Pinyothepprathan of Phuket City Police.