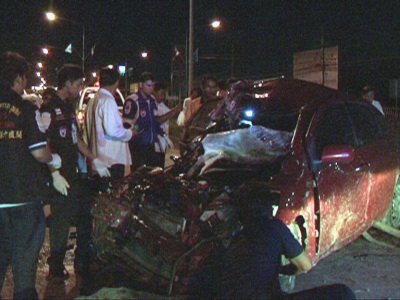 PHUKET: A young woman died of injuries sustained in a high-speed car crash on the bypass road near Tesco Lotus early this morning.

Phuket City Police were informed of the crash at 4:20am. The accident occurred in the southbound lane, in front of the Tesco shopping complex.

Arriving at the scene they the found a red Toyota Vios overturned on the median strip, the entire front of the driver’s side smashed in.

The car’s only passenger, a young female, failed to respond to calls by rescue workers.

A subsequent check revealed that she had no pulse.

Kusoldharm Foundation rescue workers used a forklift to turn the car back over and then used “jaws of life” metal cutters to dislodge the woman’s body from the wreckage.

The victim appeared to be in her mid-twenties.

There was no wallet, driver’s license or other picture ID found at the scene.

The only identifying document inside the vehicle was a doctor’s certificate issued by Vachira Phuket Hospital the day before, confirming that a woman aged 25 was suffering from fever and should stay home from work.

Also in the car, police found documents relating to the yachting industry, leading them to suspect the deceased may have been employed by a local marina.

Witnesses said they saw the vehicle traveling at high speed before it swerved into the median strip and smashed into a concrete pole.

Police initially suspect that the woman may have fallen asleep at the wheel under the influence of prescription drugs prescribed for a fever.

50 foreigners dead in Phuket this year