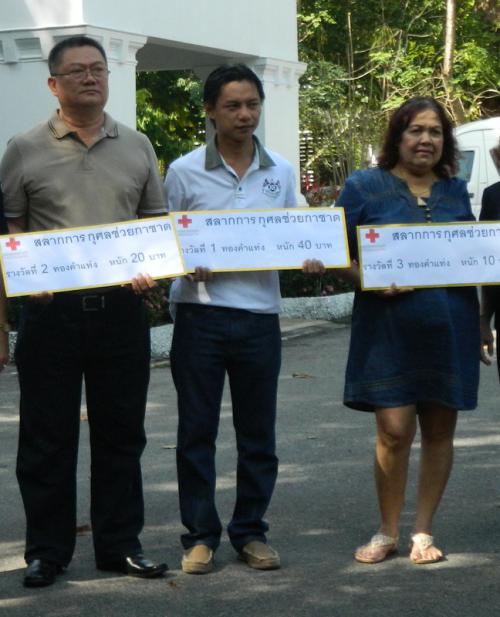 PHUKET: The top prize winner of the Phuket Red Cross lucky draw didn’t know for several days that he had won because he didn’t check his tickets.

“I buy these tickets every year to show my support for the Red Cross. This year, I bought a book of 10 tickets. I didn’t bother to check them until I heard that the winner hadn’t come forward. Then I looked at the numbers and realized that I’d won.”

“I am so happy. I plan to use the money to further my education or maybe start a small business for my family.”

The second-place prize of 375,000 baht worth of gold was awarded to Somchai Thopsungnern, 50, a car equipment salesman.

The third prize of 187,000 baht worth of gold was given to Aumphan Jampathong, 53, a housekeeper at Kata Beach Resort and Spa.

Mrs Pawinee expressed her thanks to all those who had supported the fair.

To see all the winning ticket numbers, including those for fourth, fifth, and sixth-place prizes, click here.

After February 28 unclaimed prizes will be donated to the Red Cross.