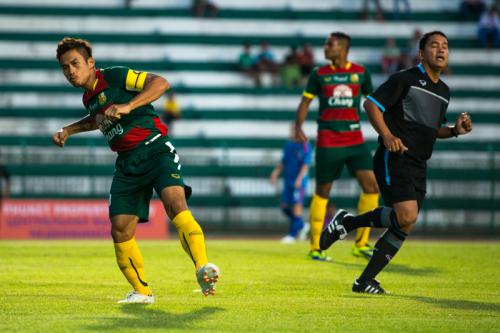 The result came to the dismay of the hundreds of Russian spectators who’d turned out in patriotic fashion – many waving red, white and blue flags, some even wearing face paint.

Cheered on by only slightly more home fans – scattered in pockets throughout the 15,000-seat stadium – the recently re-branded “Ronins” scored two goals in each of the two halves.

In the first half, newly appointed captain Wasan Natasan netted the goals, while the second half’s goals were scored by local youths, Wuttichai Sooksen and Sittipong Yaifai – both making their professional debut to the delight of the local crowd.

In all fairness, the Russian side – clearly less fit than Phuket – were playing with only four reserves, compared to Phuket who were able to field almost two different squads in each half.

Indeed, the score could have easily been 10-nil, but Valdivostok’s keeper Vitaly Dubovik, arguably the best on his team, had denied a dozen on-target strikes by eager Phuket players.

Despite the score, Russian fans flooded the pitch after the match to get pictures with their beloved team.

Speaking to the Gazette after the match, Phuket FC Coach Stefano “Teco” Cugurra said he was pleased with the result.

“I can see that the fitness of our players was much better, and I also observed that they have a better understanding among themselves… They paid attention and passed well, and the result was four goals.”

Asked about the other team, Coach Teco said, “At first we played a defensive formation to be cautious because we knew little about our opponents, but as the match progressed, we adjusted and played more attacking… They are quite strong players and were able to stop many of our attacks, but it made us work harder and the hard work paid off.”

Phuket FC will look to continue their good form, starting in a three club mini-tourney this weekend, the “Saksee Cup”.

Then, on Monday, January 27, the Ronins will host fellow Southerners, Thai Division 2 club, Nakhon Sri Heritage FC. The match will also kickoff at 4pm at Surakul Stadium – both matches will have a 100 baht admission.

Fans who want to see the quality of Phuket’s opponents should head up to British International School Phuket on Saturday, January 25 afternoon when DPMM Brunei plays Nakhon Sri Heritage at 4pm.