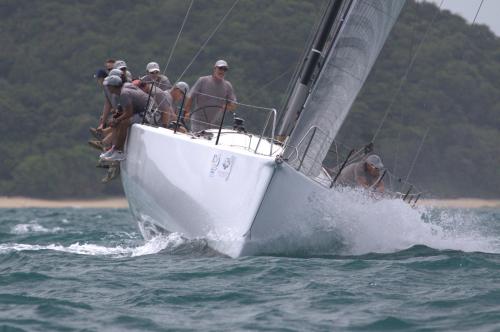 Winds exceeding 15 knots, combined with 2-3 meter swells, made for perfect Phuket sailing conditions on Day One of the award-winning regatta.

Three boats lined up in IRC Racing I including the former Team Premier sporting a new paint job, renamed Oi! and with a new crew and Peter Ahern at the helm.

Although being away from the Asian big boat sailing scene for a few years, Ahern and crew were back where they left off winning the first race on corrected time.

The Reichel Pugh 45 Katsu, skippered by Ben Copley, was just one minute back in second with Thai favourite Wan Ma Rang, skippered by Kevin Whitcraft, in third.

The second race got underway in softening breeze and improved crew work with clean and slick mark roundings by Katsu saw them steal the handicap win in Race 2 from Oi! by less than a minute, with Wan Ma Rang again in third.

With just two to three minutes separating the three boats in IRC Racing I, any mistake could prove costly in this class.

Pre-race potential podium placer, Madame Butterfly, skippered by Peter Dyer, suffered equipment problems in Race 1 leaving them to finish the day with a DNF and DNS, and their hopes of a podium looking distant.

Tight racing in all the classes on Day 1 of the 2013 Cape Panwa Hotel Phuket Raceweek.

The Firefly 850 sport catamarans were in their element in today’s conditions with many flying a hull and covering the course in record time.

Defending champion in the Firefly 850 class, Voodoo skippered by Hans Rahmann, got off to a slow start by their standards with a 2,3 today. However, the glory belongs to John Newnham and his crew on Twin Sharks who nailed both starts and sailed impeccably to scored two bullets and take an early lead in the series. A 3,2 by Roger Kingdon’s Moto Inzi puts them in a healthy position going into the second day.

Despite leading off the line in Multihull Racing class, Peter Wilcox and crew on Mojo suffered gear damage and retired from Race 1 leaving it open for Asia Catamarans Hurricane who was hot on their tail. However, they suffered a damaged spinnaker while leading and fell back to finish fifth overall opening to door for John Coffin’s Java to take the win, marginally ahead of Phuket Raceweek co-organizer, Grenville Fordham’s Nina, and DaVinci, skippered by Peter Gallagher, in third.

In Race Two, with lessening winds, Aussie Alan Carwardine’s Asia Catamarans Hurricane made up for their problems earlier with a clear win over Java pushing them into second, and DaVinci again claiming third.

The Classic class race saw the lumbering “Queens of the Sea” led home by Simon Morris and crew on Sirius, with the 107-year old Seraph, skippered by Captain Bao, in second and Laurie Piper’s Atlanta in third. The largest in the fleet, the stunning 90-foot Letizia, skippered by Capt. Bernd Gundel, was OCS and will be looking to make ammends tomorrow.