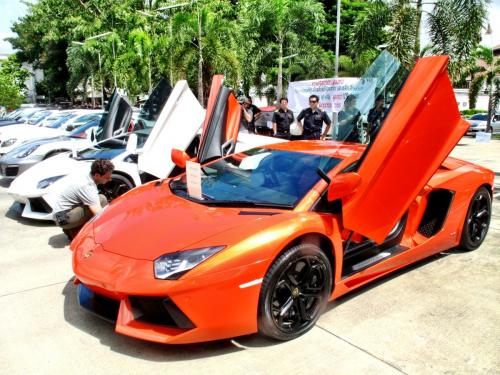 PHUKET: A second round of the Department of Special Investigation’s (DSI) probe into supercar owners suspected of tax evasion did not turn up any cars registered in Phuket.

The second batch of cars under investigation was composed of only about 60 vehicles.

However, only 548 (less than 10%) of the 5,834 registered luxury cars suspected of having been issued papers through a tax-evasion scheme have so far come under the scrutiny of DSI officers (story here).

“More than 200 of the car owners from both lots have not submitted their car documents to us for investigation. We will now have warrants issued requiring them to bring their cars and documents to us next week,” a DSI officer who declined to give his name told the Phuket Gazette.

The deadline for suspects to submit the necessary documentation for their cars to the DSI was June 23.

DSI chief Tharit Pengdit estimated that tax evading luxury car owners have probably cost Thailand 20 billion baht in lost revenue. The estimate was based on the assumption that more than 8,000 luxury vehicles in the country had been or were about to be registered illegally.

Phuket Land Transport Office chief Terayout Prasertphol confirmed to the Gazette in June that his office has only registered legal vehicles and that all taxes are fully paid on all vehicles registered here.

“I have received calls from people asking to register cars illegally, but I turn them down, so they go to other provinces,” Mr Terayout explained.