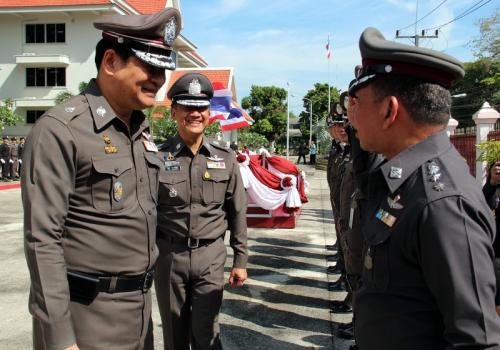 PHUKET: Members of the Office of Inspector General (OIG) arrived on Phuket as part of the launch of a nationwide program designed to oust crooked police officers and slowly change police culture in Thailand.

Each of the 1,460 police stations across Thailand will have 10 of its officers selected this year to help gather information about the behavior of police officers and the station’s actions as a whole.

“The officers will be selected at the end of every year and receive the honor of becoming ‘White Police’. Another 10 will be selected next year. Eventually, we will be able to change police culture for the better, and bad police officers will not be able to function within the ‘White Police’ organizations,” said Commander Amarin Akaravong from the Office of Inspector General.

The OIG is in charge of police stations across the country, Pol Gen Amarin explained.

“We have to pay more attention to the performance and behavior of our officers. We have heard that some police officers have even become drug dealers, which is painful to find out.

“The public has shown more and more concern with how police are behaving – we can see this from the number of complaints about police acting inappropriately that are being filed with us,” Pol Gen Amarin stated.

He made it clear that the goal of his visit to the island was to see whether or not the police of Phuket were adequately fulfilling the needs of the people, especially tourists.

German tourist to be flown home for neurological treatment