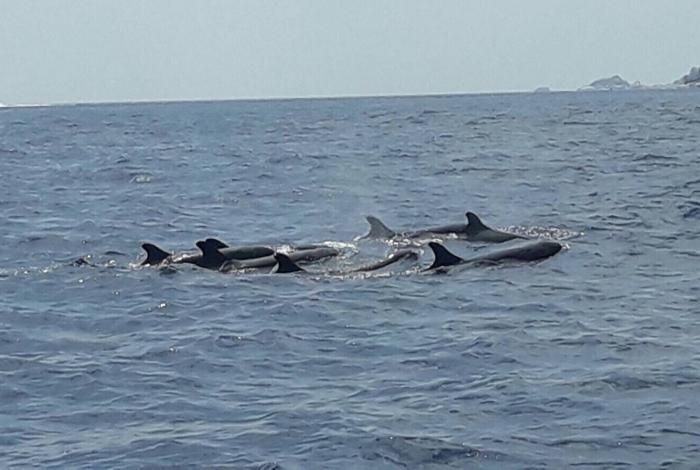 PHUKET: Another pod of false killer whales was spotted yesterday by Phuket-bound tourists around the Mu Koh Similan area.

The false killer whale (Pseudorca crassidens) is the fourth-largest dolphin and lives in temperate and tropical waters throughout the world.

“We were on our way to Phuket when we arrived at an area called Hin Pusah and saw at least 30 whales. The captain slowed down the boat so tourists could catch a glimpse,” said Mr Boonchoo Paeyai, the owner of Wow Andaman Tour.

Kongkiat Kittiwattanawong, head of the Marine Endangered Species Unit at the Phuket Marine Biological Center (PMBC), told the Phuket Gazette that based on the pictures they do look like false killer whales.

“False killer whales live in deep water in both the Gulf of Thailand and the Andaman sea. They eat fish and squid, and are on the list of protected animals,” said Dr Kongkiat.

He also warned that 30 of them had washed ashore at Koh Racha 9 years ago, and that people need to be careful when the come across them.

“When spotted, feel free to view them from afar. Do not try to touch them or give them any food. That could cause them to fall sick. Boat captains are also advised to take caution,” said Dr Kongkiat.

He also said the quality of the Andaman’s waters may have improved as there have been numerous sightings during the past several days.

Cruise ships in Phuket inject over 30 million baht a day

One dead after drunk man stabs another in Phuket