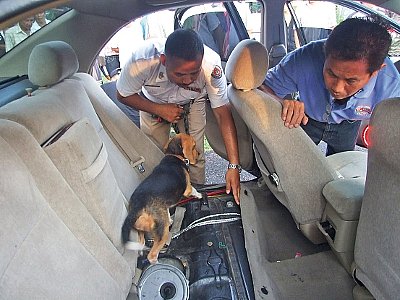 PHUKET: Two dogs that underwent training to sniff out drugs on Phuket are currently “on leave” from active duty as their owner tries to find new handlers for them.

Muang District Chief Supachai Pochanakul, the owner of a beagle named Bebe and a pitbull named Boo Boo, told the Phuket Gazette this afternoon that the two dogs are “healthy and happy” at their home in the Phuket International Dog School on Koh Sireh.

The duo underwent intensive training at the school to learn how to sniff out drugs, especially ya bah (methamphetamines) and ya Ice (crystal meth).

The training appeared to be a major success. Just five minutes into her first-ever assignment in June last year, little Bebe sniffed out 44 ya bah pills and 500 milligrams of ya ice from beneath the seat cushions of a car at Suan Luang Park. Two men were arrested.

To find out why a string of similar arrests hadn’t followed, the Gazette today contacted Mr Suphachai. The dogs were currently on leave because their former handlers were no longer available to serve alongside them, he said.

“We want to continue the project, but it is on hold until we find a new handler. We need to find the right person, as they have to develop a very close bond with the dogs,” he said.