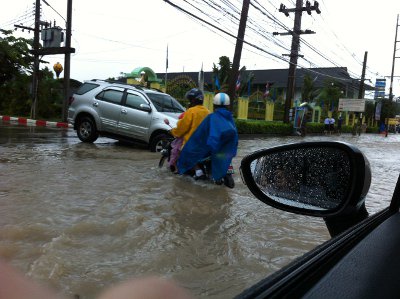 PHUKET: Heavy rain across Phuket this morning has caused minor flooding in some areas and severely hampered traffic flow during the morning rush hour.

The Phuket Gazette has received reports of minor flooding in Phuket Town, as well as some parts of Chalong and Patong.

The news comes as the Thai Meteorological Department (MD) at 5am today issued its eighth consecutive “heavy rain warning” for the Andaman region and other parts of Thailand.

“People in the risk areas should beware of severe [weather] conditions during [the coming] one to two days,” the warning advised.

The weather monitoring station at Phuket Airport recorded 30.9mm of rainfall in the 24 hours preceding 7am today, and a current relative humidity of 96 per cent.

The weather warning reported an “intense monsoon trough” across the Central and the East of Thailand with a strong southwest monsoon prevailing and covering the Andaman Sea area, producing “isolated heavy to very heavy rain” across the South.

Strong wind-waves of about two meters are likely to form in the Andaman Sea. All ships should proceed with caution through Sunday, the warning advised.

The TMD also reported that Typhoon “Jelawat” over the eastern Philippines, with maximum sustained wind speed of about 200km/hr, will move near Taiwan over Friday and Saturday.

Similarly, tropical storm “Ewiniar” over the Pacific Ocean, with maximum sustained wind speed of about 85km/hr, will move near Japan over the same days.

Both of the storms will have no effect on Thailand, said the TMD.