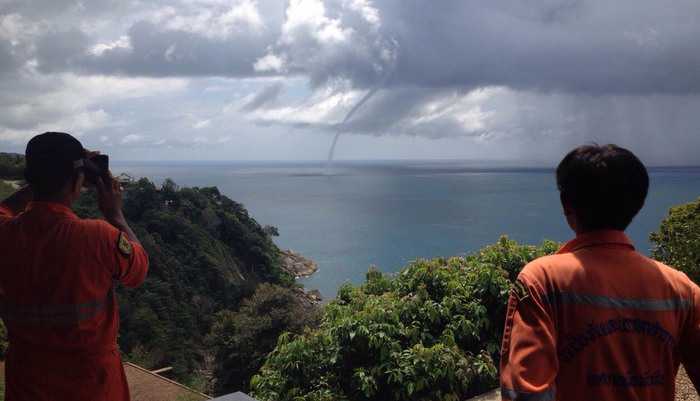 PHUKET: A waterspout that emerged in Patong Bay this afternoon set social media sites abuzz in Phuket with a flurry of comments, stunning photos and videos of the phenomenon.

Some people even expressed fear that the waterspout may turn into a fierce storm that could hit land and wreak havoc.

“There are no storm warnings this afternoon. People don’t need to panic. Waterspouts of this kind occur quite naturally – no one is in danger,” Suntad Panbanpeaw, director of the Meteorological Department’s Phuket office, confirmed to the Phuket Gazette.

“They happen quite often in the Andaman Sea and the Gulf of Thailand.”

Mr Suntad explained the lightning and electrical activity in the clouds that was also witnessed at the same time as the waterspout.

“During the northwesterly monsoon this year, there has been a lot of cloud formation, but this results in storms mostly at sea – not on the island,” Mr Suntad said.

“We were monitoring the electrical activity – it’s a natural phenomenon too,” he said, noting that the occurrence is aggravated by human development.

“More houses and buildings on the planet can increase the chances of this happening.

“Please stay calm. Nice weather for the high season is on its way.”

Phuket freedivers go for distance in the Dynamic with Fins event