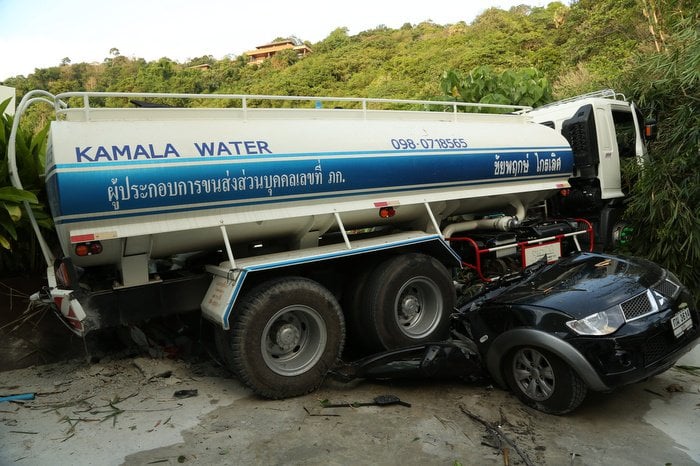 PHUKET: A water tanker rolled backwards down a hill and crushed a pick-up truck outside a residence at Jomchang Villa in Kamala yesterday afternoon, only moments after the pick-up driver got out of her vehicle.

Kamala Police officers called to the scene were told by witnesses that the pick-up driver, who declined to be named, had escaped almost certain death as the water truck barreled down the cliff to nearly flatten her vehicle.

It was not clear whether she had seen the tanker coming and ran for her life, or had simply left the truck, by sheer luck, for some other purpose.

“We assume that the tanker’s emergency brakes failed, which caused it to hurtle down the hill inside the estate,” Lt Prasert Thongprom of the Kamala Police told the Phuket Gazette.

Since “the accident happened on private property [a Jomchang Villa] and both parties have contacted their insurance companies and are settling the matter privately,” Lt Prasert explained, no charges will be pressed.

The two parties were negotiating the damages at Kamala Police Station this morning.