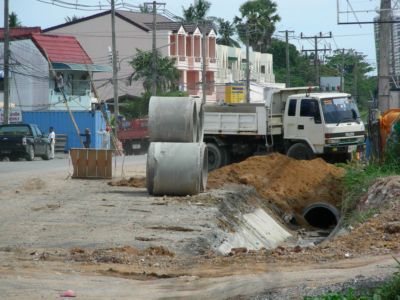 PHUKET: Work on widening Chao Fa West Rd has been further delayed due to a dispute over moving water pipes and the expiration of the contract with the company assigned to carry out the work.

The Phuket Provincial Highways Office (PPHO) is still unable to give a completion date for the project, which began in 2005.

PPHO Chief Supphasak Nunsang told the Gazette that construction delays meant that the project overran the March 6, 2007, expiration date on the contract with the construction company. The PPHO is now in the process of hammering out an extension to the deal, though work will continue during negotiations.

“The reason for the delay is problems with moving water pipes and electricity poles to allow construction to take place. Now all the electricity polls have been moved out but we are still waiting to move the water pipes. This is slowing us down considerably.

“The water pipes have not been moved because the Phuket Provincial Water Supply (PPWS) does not have the budget to move them. Our contractor does not want to move the pipes as it is not part of the work stipulated in their contract.

“They are also worried about causing leaks. We used to try to dig under the pipes, but this led to some pipes being broken and local residents’ water supply was disrupted, which they weren’t very happy about,” he said.

However, PPWS Chief Sayan Wareearoonroj told the Gazette, “The water pipes are no longer our problem, it is now the responsibility of the construction contractor. The pipes have been damaged many times during the construction and we have had to fix them.

“The PPWS has already finished moving the pipes for them and it’s now up to the contractor to finish the job.”