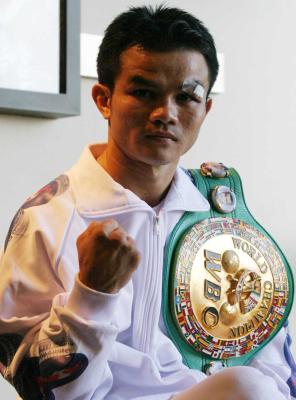 The fight will take place on October 8 in Karon, though a precise venue has yet to be decided.

According to the popular website boxingtalk.net, Pongsaklek’s opponent will be 15th-ranked Carlos Bouchan of Mexico, who holds the Central American Boxing Federation and Mexican flyweight titles.

Pongsaklek, 27, was earlier tipped to defend his title against 8th-ranked Diosdado Gabi of the Philippines, who had boldly predicted a win by a knockout against the Thai champ.

Pongsaklek has fought 62 bouts during his professional career, never losing a fight, and being held to a draw only twice. In 31 of these bouts his opponent ended up on the canvas.

The Thai champ won the title in March 2, 2001, and his most recent defense was in Khon Kaen last July, when he knocked out 15th-ranked Luis Angel Martinez in round five. His fight against Bouchan will be his 11th title defense.