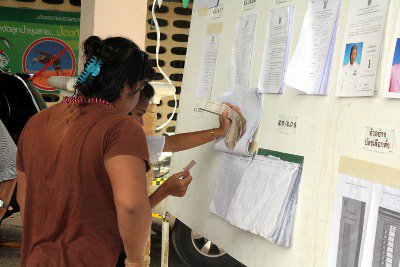 PHUKET: A recount of votes cast in a single electorate in the Phuket Provincial Administration Organization (PPAO) council election on Sunday has cost the leading Khon Baan Rao party its clear majority on the council.

The news came this afternoon as PPAO Chief Administrative Officer Manop Leelasuthanon explained to the Phuket Gazette, “There was an error when officers entered the number of votes tallied for Electorate No 14.

“Information supplied by a polling station was provided based on the number of votes a candidate received, but the computer system required that the information be entered according to the ballot number for the candidate.

“Hence, the number of votes entered in the computer system for candidates in that area was entered in wrong,” he added.

Mr Manop explained that the mistake was caught after officials rechecked the vote count following concerns expressed by candidate Mr Opart, who is now the unofficial winner for that electorate.

Mr Opart said that he believed there had been a mistake since the number of votes he had won according to officials did not match the tally his own supporters came up with.

Mr Manop confirmed that the corrected results were sent to the Election Commission (EC) in Bangkok for confirmation. The EC has 30 days from the date of the election to confirm or reject the results.